'Yuri!!! On Ice' Episode 6 Recap, Episode 7 Spoilers: Yuri Ranked First In First Round China Prelims; Can He Deliver Another Perfect Performance In The Free Program? 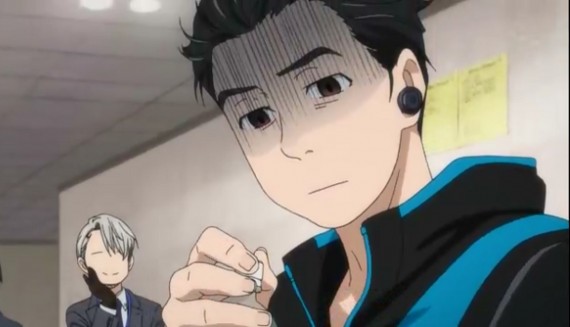 We enjoyed a lot of performances in "Yuri!!! on Ice" episode 6. Each contestant has their own varied programs befitting their personality but Yuri delivered a perfect performance and ended up being on top place for the first round. However, can he keep this up for the free program performance in episode 7? The anime series also gave us some fan service of Viktor being intimately close to Yuri after getting drunk. Chinese skater Hong Ji said it's R-rated, but you better judge it yourself.

With so many feature participants, the second round of the Grand Prix Series Opening Event in China will be continued in "Yuri!!! on Ice" episode 7. First up in "Yuri!!! on Ice" episode 6 is Yuri's friend, Thai figure skater Phichit Chulanot. He danced to "Shall We Skate," which Celestino said is a first to Southeast Asian skaters. He definitely got the audience on his side as they clapped with the beat. However, he made a mistake and had a score of 86.7.

Second is Guang Hong Ji, 17, from China. He danced gracefully to some French music which enthralled the audience. Seeing the two, Yuri can't help but be nervous -- he is running from side to side and Viktor said it's his first time seeing him like this. A fellow figure skater, Chris, told him previously that he had to bear the sin of keeping Viktor to himself as the whole world is waiting for his legendary coach's return to the rink.

It's finally Yuri's turn! This is the third time we've seen him performing "On Love: Eros" in a competition but this is far better and far more eros than any of his previous performances. He also landed all his jumps perfectly, even the quadruple salchow he always misses. His perfect performance earned him a new personal best of 106.84 points. Viktor is definitely proud and happy. He said he is his best student (well, he is his only student), but I'm worried this will come back to haunt him in the second part of the competition.

Georgi Popovich, 27, is Viktor's former teammate from Russia. He gave a powerful and intense performance with the theme "Beauty and the Beast," which he projected as a brokenhearted man who is trying to curse the girl who cheated on him. It is somehow scary. Next is Leo de la Iglesia, 19, from the U.S. He danced to an upbeat song "Still Alive" and his performance looks like he's combining figure skating and hiphop.

Last is Christophe Giacometti, 25, from Switzerland. His theme is the same as Yuri's; however, instead of a youthful eros, he depicted a more mature one with the song "Intoxicated." His portrayal of eros is better than Yuri's, but he made a mistake in the first jump and was given a grade of 85.60. It's so funny how Yuri pouted that the sex appeal award goes to Chris while Viktor is tapping his shoulder. And then he realized that he is currently in the first place! Is this really a good thing?

It seems like it's not! The preview for "Yuri!!! on Ice" episode 7 shows that Yuri is very nervous for his free program due to the burden of currently being ranked first and his miraculous perfect performance in the first round. Even his mother said that he is not used to being in the first place. Meanwhile, all the other competitors are very excited and motivated to catch up. Chris, now in third place, is one of the greatest contenders. He is not a good starter but he is good at catching up. There is also the Russian skater Georgi. Yuklov, the Russian team's coach, still has some animosity towards Viktor for leaving the Russian team and becoming Yuri's coach. He said ending up second in the first round was within his expectations and he's not going to lose to a third rate coach, pertaining to Viktor.

'A Silent Voice' Film Review: Japanese Animated Film Which Might Bring You To Tears

Prepare some tissues because this movie might make you cry. "A Silent Voice" animated film is a heartwarming story about bullying.

Fans will see Ino and Sai's story in "Naruto Shippuden" episode 484. Meanwhile, the most awaited epilogue episodes will be airing this winter.

Yuri will take off to China to compete against his friend Phichit to advance to the Grand Prix. Interestingly, Phichit's coach is Yuri's old coach Celestino. How will Yuri battle against such familiar faces?