'A Silent Voice' Film Review: Japanese Animated Film Which Might Bring You To Tears 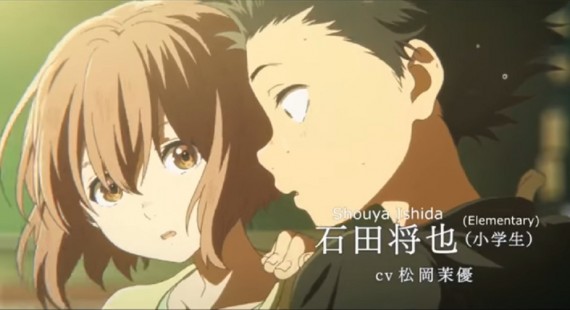 Here is another Japanese animated film that might make you cry. "A Silent Voice" is an adaptation of a manga series of the same title, which deals about bullying, regret, friendship, redemption and learning how to love.

The film might not have beaten Makoto Shinkai's "Your Name," opening at number two in Japanese box office on Sept. 17, yet as of Nov. 6, the anime has earned 2.1 billion yen in its eighth week and has sold 1.6 million tickets. Meanwhile, the first volume of Yoshitoki Ōima's original manga ranked number 19 on the Oricon manga chart and won the New Creator Prize in the 19th annual Tezuka Osamu Cultural Prize. As of March 2014 the volumes of "A Silent Voice"  manga had 700,000 copies in circulation.

The two-hour film follows the story of a delinquent named Ishida Shouya, who tries to redeem himself after reuniting with his deaf classmate, Nishimiya Shouko. Ishida's increasing bullying made Nishimiya transfer to another school during elementary and in turn Ishida was isolated by his classmates and he finally understood the pain of getting bullied himself. The only thing that is keeping him from committing suicide is the hope that he can reunite with Nishimiya again and repay his sins.

It was good how bullying was portrayed as a major issue in the film. The characters' reactions look so much real that you can see this is also how people will react in a real-life situation. Ishida was not the only person to be blamed why Nishimiya was isolated. Their teachers, for one, turned a blind eye to what's happening in the classroom. HIs classmates also either joined him in bullying or didn't do anything to stop them. Aside from realistic reactions, it is one of those very few animated films that paid much attention to body language and small details. The sound effects are also good especially when Nishimiya realized she can actually feel the fireworks even though she can't hear it through its vibrations.

Some critics sang praises for the movie while there are others who gave negative reviews. The movie is clearly not for everyone due to its unconventional style. According to Anime News Network, one of the strengths of the film is that the production didn't put a translation for the sign languages that were used in the movie. It left the viewers hanging and guessing on what the characters might be saying, adding more flavor to the film.

Another good point about "A Silent Voice" is its meticulously done effects and pleasant lighting. Manga fans would be surely be pleased to see one of their favorite stories with color and effects. However, those who are expecting some love story might be disappointed. The movie's marketing somehow gave attention to the romance of the main characters but it has no resolution in the film. Whether they end up together or not will depend on your own imagination. It is same with the other characters who were not given proper endings.

"A Silent Voice" will also premiere in the U.K in late December or early January 2017.

Fans will see Ino and Sai's story in "Naruto Shippuden" episode 484. Meanwhile, the most awaited epilogue episodes will be airing this winter.

Yuri will take off to China to compete against his friend Phichit to advance to the Grand Prix. Interestingly, Phichit's coach is Yuri's old coach Celestino. How will Yuri battle against such familiar faces?

Fans will see the demi-humans live in "Ajin: Demi-Human" live-action movie next year. What's more? Takeru Sato is cast for lead role. Kei will be portrayed as a medical intern to fit Sato's real age.

Anime film "A Silent Voice" is finally make its way to theaters outside Japan. It will first be aired in Hong Kong, Taiwan, Singapore, and Malaysia.