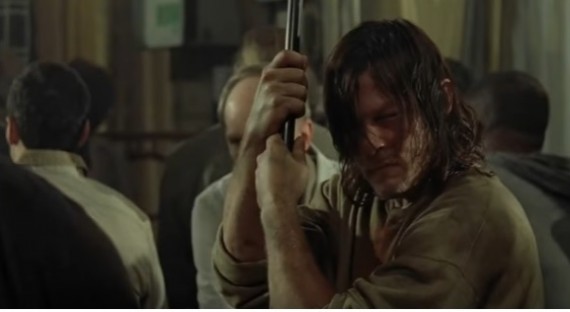 Another Major Character Will Die

The Walking Dead fans, brace yourself as another major character will die in the incoming episode of the series. Season 7 started with a bang when Negan killed two of the most lovable characters in The Walking Dead series, Glenn Rhee and Abraham Ford. No offense to Abraham but we all agree here that Glenn should have lived for another season. Apparently, the killing of major characters is far from over as our credible sources say.

If you were able to follow the last few episodes, this theory and rumors should be considered. According to a respected site, these two characters will face their impending death either next week or the week after. The characters mentioned are, Sasha Williams, played by Sonequa Martin and the fan favorite Daryl Dixon( Norman Reedus).

Now, I know most of you won't believe this, just like me, but I can't disregard this "speculations" as the massive series showed in episode 1 this season. The same guy(website) who wrote about the killing of Glenn and Abraham is back at it again. He was able to predict the outcome of the pilot episode and was able to report about Daryl's current situation. I'm not sure where he's getting his sources but 9 times out of 10 he is correct.

We all know that Sasha is a fierce and a no-nonsense character. She is extremely accurate with her shot and very practical towards making decisions. She can be considered as the girl version of Norman Reedus. She is one of the remaining major character in the show and this season or episode might be her last. Last episode showed us that she was trying her best to help Maggie(Lauren Cohan) at the Hilltop.

A former firefighter prior to the zombie apocalypse, she knows how to survive. Although well versed with survival, she was traumatized with the apocalypse which made her extremely cold blooded and detached. Going back to the last episode, it was evident that she is preparing for something. She was seen sharpening her trusted knife with Abraham's cigar in her mouth. According to a reddit user, she is planning to attack the saviors. I won't lie, if she will do it, she might die. Numbers does matter.

Arguably the greatest character in The Walking Dead Series. He is as tough as they come. A redneck with a badass mentality. Daryl Dixon is built for survival. He doesn't talk much but if he does, it is usually a one-liner full of sarcasm. The biggest difference between Daryl and Rick is, Daryl doesn't give a s***. He doesn't let his emotion control him over circumstances that can be solved by practicality.

Following his controversial statement on his role in a recent interview, is Norman Reedus preparing us for his character's death? Let us check some segments that supports this idea. One of the producers mentioned that the near-death-experience of Daryl is a premonition on what will happen to him. Right now, Daryl is in a bad situation in the Sanctuary. Captive by Negan and his men, it only means more trouble for him.

Some of the fans are already threatening the producers and the director if they will kill Daryl in the future episodes. There are more than count on one hand fans who already gave producers multiple death threat and they won't stop there according to a fanpage. As a fan, I know that it sucks when one of the major character is killed by the producers. However, we have to understand their reason behind it and we have to move on with the outcome.

The creator of 'The Walking Dead' comics mentioned that the TV show could keep going even after the point of when the comics reaches its conclusion.