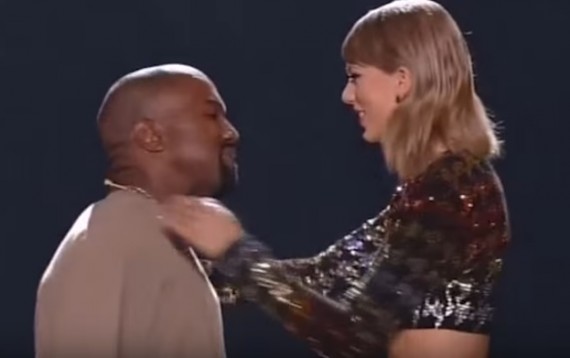 In a stunning turn of event, Taylor Swift forgives Kanye West after their long documented verbal battle. This was not the first time Taylor forgave her enemy but this might be the most shocking.

It all started way back 2009 during the VMA awards when out of nowhere, Kanye West stormed the stage and interrupted Taylor Swift while receiving her award. To this day, it is still considered as one of the most disrespectful and infamous moment in Music Award history. Everybody was shocked with what had happened but not Kanye West. The controversial rapper didn't waste time to shame Taylor Swift in front of hundreds in attendance.

Here's the full context of the West - Taylor incident. "Thank you so much!" Swift started. "I always dreamed about what it would be like to maybe win one of these some day, but I never actually thought it would have happened. I sing country music so thank you so much for giving me a chance to win a VMA award." While she was about to continue her heartfelt speech, Kanye West appeared and took the mic.

"Yo Taylor, I'm really happy for you, I'll let you finish, but Beyoncé has one of the best videos of all time. One of the best videos of all time!" The Radio Music Hall stood in silence for a couple of minutes. They were stunned with what had happened. Kanye West continued to rant then gave the mic back to Taylor Swift. Beyonce looks horrified and astonished with what Kanye said. MTV chairman and CEO, Judy McGrath express her thoughts on the event and she quoted Diddy, "It' rock and roll". She felt sorry for Taylor Swift but in the end, Taylor received a standing ovation and the loudest applause of the evening.

At first, nobody believed that Kanye West is having some health issues. He is notorious in creating a scene and has no plans in stopping. But prior to him being hospitalized, it was reported that he ended his concert way too early in Los Angeles. Everybody was upset with the sudden stoppage of the concert, including Sacramento Kings All Star, DeMarcus Cousins. Boogie shared his insight in one of his social media account. He said that Kanye, just left without warning or whatsoever.

Taylor is aware of Kanye's health issue. The pop star princess and a certified icon feels bad about it and as mentioned by her friend, she is willing to forgive Kanye but won't forget what happened. "After seeing her great friend Selena come back from her own demons, Taylor only hopes that Kanye can find the help he needs," continued by the insider. She was trying to reference Kanye with the recent issue Selena was in. Selena Gomez was battling her own demons and her lupus case. She also went to rehab to recuperate and destress.

Well, Kim Kardashian is present when his husband needs him the most. However, there are a lot of speculations stating that the reality star is jealous with Taylor Swift's gesture towards Kanye West. A credible source states that Kim K intended to like some of Taylor's instagram post so that she will get her attention. Initially, there were rumors that Kim K wants to reignite the feud of Kanye and Taylor.

Ariana Grande News, Pop Star Ready To Have A Baby, Lindsay Lohan Comments On Her Look

Ariana Grande News, Pop Star Ready To Have A Baby, Lindsay Lohan Comments On Her Look

Kanye West claims the Kardashian family are hypnotizing him like in Jordan Peele's super creepy movie 'Get Out.' Wow.

The rumors are actually true as Kylie Jenner has a new boyfriend in the name of Travis Scott. Also, Tyga seems to have moved on as well when paparazzi caught him with another woman.