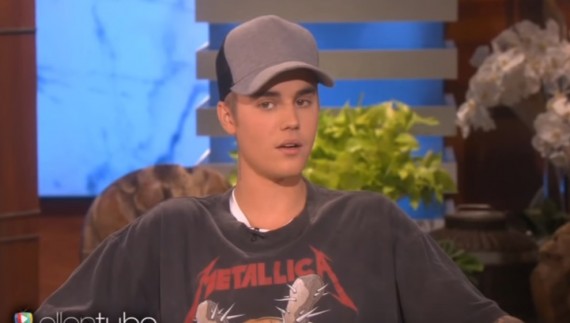 Justin Bieber is known for making a buzz or a scene. He does crazy things if he wants to and when he wants to. Last November 18, the Canadian Prodigy's ass crack was exposed because the Beliebers can't get enough of him.

Justin Bieber And His Beliebers

We all know that he is talented and an eye catcher but Justin Bieber had some crazy stuff under his belt. The hitmaker of the song "What do you mean" was victimized by his own fans called "Beliebers" when his pants was yanked down showing his ass crack. Justin Bieber was not fazed the first time, but when he noticed that his ass crack was already showing, he was blushing and visibly uncomfortable. He was helped by his mammoth bodyguards to fix his pants. Bieber tried to do it on his own but there were a lot of Beliebers who were trying to get a piece of him.

Justin Bieber's fan are like no other. They are crazy when it comes to Justin Beiber and they will do anything to defend him against the non-beliebers. There are numerous cases reported that they will go above and beyond the law while defending their idol. Back in 2014, there was a fan somewhere in Colorado where apparently she stabbed her friend because he didn't like Justin Bieber. There was also a crazy petition online that wants to drink Justin Bieber's urine. They are that crazy and obsessed with the pop superstar.

JB has a lot of ink right now and the newest on the list is the words "Son Of God Tattoo". The Ink is situated on his lower chest, the same area where Tupac has his famous "Thug Life" ink. He was questioned when he had his first tattoo as some of the critics say he is too young and it is not a good example to his fans. However, Justin Beiber does what he wants. He already have at least five tattoos on his body; and he wants to have more as he explained.

There are a lot of rumors circulating on this power couple. As reported by one of the respected website, Justin Bieber was spotted in the rehabilitation center where Selena Gomez was situated. On that the same event, Justin Bieber took that chance to say sorry (no pun intended to his song) to Selena Gomez. The former Disney Princess appreciated the gesture of Justin and was visibly happy about it. After a day or two, insiders claimed that Justin Bieber didn't only visit Selena Gomez but proposed to her.

There are no confirmation yet on both sides if this is true but just a couple of days ago, another news broke out about Selena Gomez is moving to Canada with Justin Bieber. I really don't know where this "news" are coming from but they are everywhere. On the other note, fans of Selena Gomez were relieved when she was out of the rehab facility already. During the American Music Awards, she made an epic acceptance speech that moved Lady Gaga to tears.

Exclusive: X Factor's Honey G Might Be The Winner Already? Simon Cowell And Judges Made A Standing Ovation; Fans Irate

'The Simpsons' Season 28 Update: Bart Finally Has Control With The Remote, 600-Episode Marathon Will Be Epic