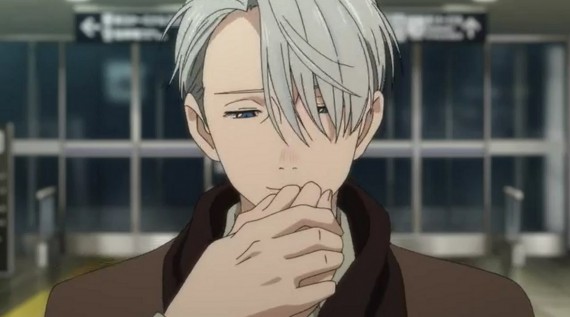 Viktor and Yuri had a teary reunion at Fukuoka Airport after the Grand Prix Finals in "Yuri!!! on Ice" episode 9. (Photo : JP ANIME/YouTube)

Viktor came back to Japan and Yakov really did become Yuri's coach in the free skate in "Yuri!!! on Ice" episode 9. Yurio made a perfect performance and came in second place while Yuri ranked fourth, but they are both qualified for the Grand Prix Finals thanks to Yuri's silver win in the Cup of China.

It was a touching goodbye for Yuri and Viktor in "Yuri!!! on Ice" episode 9. Viktor said he would be with Yuri in spirit and told him to ask Yukov if he has questions and hug him if he's in trouble. Meanwhile, Yurio enjoyed a Katsudon pirozhki made by his grandfather -- a Russian fried bun filled with pork cutlet, scrambled eggs and white rice. Was this the reason why he did not watch the short program in "Yuri!!! on Ice" episode 8? (I really want to eat that too).

Nekola's theme was cyberpunk and he danced to an upbeat music. His jumps had high difficulty, mostly quads but he made some mistakes. Meanwhile, Sala and Micky were having an argument. Sala said she would stop skating with her brother and Mickey headed to the rink alone. He had a melodramatic performance while recalling his moments with Sala and said to himself that this would be the last time he would skate for Sala -- he wanted to let go of his love for Sala. He earned a new personal best of 282.89 points and he blushed as Sala came running to him -- where did those thoughts of giving up on his sister go?

Seung Gil made an early mistake during his performance and ended up with 256.2. Next is Yurio. He decided to change the order of his jumps to earn higher points; he planned to do most of the jumps in the second half. It is the first time we saw Yurio's free skate and he almost looked like a ballerina. He had a perfect performance and had 297.96 points.

On the other hand, Yuri had some mistakes in the first half. He kept improving as the song went on and it really looked like a representation of his career. He had another mistake just before the end but he scored 282.84 thanks to his emotional projection. Yukov lectured him but he said his score is higher than he expected and Yuri hugged him. Last to perform was JJ. He perfectly executed his program which has the highest difficulty among all the programs, allowing him to grab the gold.

Due to his second-place win in the Cup of China, Yuri barely managed to pass to the Grand Prix Finals instead of Mickey, who ranked third in the competition. Sala went to congratulate Yuri and was surprised when Yuri suddenly hugged her. Mickey was burning in anger when Yuri hugged him too with blank eyes and Mickey's mouth was filled with bubbles. Next to his hugging spree was Nekola, even the cold Seung Gil and JJ were not able to escape. The next scene showed Yurio running away from Yuri who looked like a mad zombie infected by hug virus. (He must have really missed Viktor).

After the hugging commotion, Yuri was contemplating on the road side when Yurio came flying with a kick. Yurio gave him some Katsudon pirozhki saying it's almost his birthday. He said Yuri can make an excuse because Viktor was not with him when he performed while he is in tip top form and still didn't beat JJ.

Finally, it's Yuri and Viktor's teary reunion at Fukuoka Airport. I didn't think we would see this in "Yuri!!! on Ice" episode 9 because it's actually time for the closing theme. Yuri saw Makachin beyond the glass wall and came running at the sight of Viktor. The two hugged and Yuri asked Viktor to be his coach forever. Viktor kissed his hand, prince-style, and told him it sounded like a marriage proposal. "I wish you'd never retire," Viktor added and Yuri teared up (I can't believe I'm totally melting because of two dudes hugging each other).

In "Yuri!!! on Ice" episode 10, we will witness the athletes spend their break before the finals. The preview for "Yuri!!! on Ice" episode 10 shows Yuri and Viktor practicing and his former coach is also there. Is he only visiting or are they actually having a joint practice with Phichit? That's impossible, it's almost like they are baring their weapons to each other before the finals. It is more impossible even that his former coach will have time to watch Yuri because Phichit must be busy preparing as well. In the background, Viktor is asking what Yuri would give him for Christmas and he answered something round and golden -- the gold medal!

Rob Letterman will direct the very first live-action Pokemon movie "Detective Pikachu" about an intelligent Pikachu who solves crimes together with a human.

Spring Inter-High is starting and Karasuno's first match will be against Tsubakihara Academy. The said team came from the same prefecture as Ubugawa High, who specializes with their monster serves.

"Gintama Shinsaku" will premiere on January 9. The new anime season will feature the final arc from the manga which started this July.