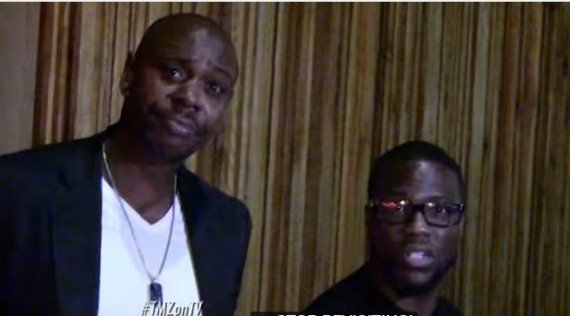 Dave Chappelle is finally back when he surprised everybody as the host of Saturday Night Live few weeks ago. Fans have been waiting to see the realest stand up comedian in the business and they were not disappointed about his return.

As previously reported, Dave Chappelle is widely considered as a comic genius and an entity on its own. Chappelle is different from the other comedians. No disrespect to Richard Pryor as he is the pioneer and OG of Stand Up comedy but Dave Chappelle is the greatest right now. You won' believe me? Check out YouTube and watch comedians, celebrities and even politicians hailing Dave Chappelle as the King of Stand up.

Although it only lasted two seasons with Dave Chappelle on, Chappelle show was an iconic and a moving sketch comedy television series. It garnered an outstanding number of viewers with its first season, they breaking records on their second installation. Chappelle Show was created by Dave Chappelle and his former best friend Neal Brennan. They were in the process in creating their 3rd season but at the same time the issue started.

As explained by Dave himself, creatively, he doesn't want to be controlled. He values freedom and dignity more than money. Dave Chappelle was defiant with one of their sketches were he was asked to wear a ladies blouse which he find not necessary. He was then offered $50 Million dollar contract by Comedy Central just to stay with the show but he declined. Chappelle then moved on and went to Africa to "hide". But as for the media, he went delusional and crazy. He was tagged as a crack head too.

Dave Chappelle - Inside The Actors Studio With James Lipton

Dave Chappelle commented on the issue of being crazy in James Lipton's Inside The Actor Studio. "The worst thing to call somebody is crazy, it's dismissive. I don't understand this person, so they're crazy, that's bullshit. These people are not crazy, they're strong people. Maybe the environment is a little sick."

"I don't I don't judge people or not like people for thinking. You know people that I love tell me I go too far sometimes, maybe I went too far but I did it. You know, and plus the only way you know what a line is to cross it, and I think that, What is life if nobody's crossing the line, you just want to try to be on the right side of history, Sometimes what's going on in the immediate present, is not as important as the long term. The truth is permanent, and then everything else will fall by the wayside," he ended.

Dave Chappelle, Chris Rock And Kevin Hart In One Show

Well, if these 3 outstanding stand up comedians could work their schedules out, they will destroy all the records when it comes to stand up comedy. All of them are on the top of their game right now. Chris Rock has proven himself time and time again, that he is top 5 in stand up comedy regardless of what era. Kevin Hart also showed his brilliance for the past decade right now. Both Chris Rock and Kevin Hart agrees, that Chappelle is on top of the food chain. As Chris Rock explained, "the only person who gives fear to my heart".

It seems like Azealia Banks went wild in her recent Instagram Story shooting fire on Doja Cat for being racist, Nicki Minaj for her beef with Cardi B, and even Dave Chappelle for sleeping with her.

YouTube accounts and their credentials are being sold online from $400 on the Dark Web, what's going on? Also, how do you protect yourself from your account being stolen and sold off?

With the coronavirus out, the most anticipated movies of 2020 including Wonder Woman 1984, Black Widow, No Time to Die and more had to delay. Here are their new release dates.