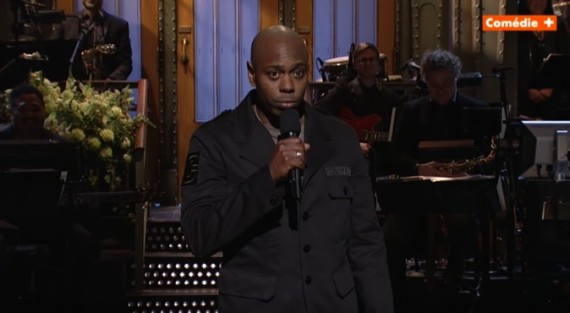 Arguably the greatest stand up comedian alive today is back with 3 comedy specials with Netflix. This will be his first televised show after 10 years when he walked out of the massive Chappelle Show.

Although it only lasted a few season, Chappelle Show is considered as one of the iconic comedic sketch show in history. It is the brainchild of Dave Chappelle and Neal Brennan(his former friend). Overall, the show received positive feedback and was astonish on how great Dave Chappelle is. The Stand Up comedian by way of Washington and Ohio is one of a kind. His creative ideas is off the charts and most of the comedy sketch right now is copying his style. Chappelle Show introduced a lot of characters and to this day, fans are still dying to see them again.

One thing that amazed the fans with Chappelle Show is, they were able to combine comedy with reality. A respected site shared its thoughts about Chappelle Show, "Dave's portrayal of the characters are genius. Not only he made you laugh, he was also crisp in informing his audience about things that they should be aware off. I'm still shocked he walked away from the show".

Dave Chappelle was offered with an enormous amount of money, $50 million to be exact. However, Dave chooses to walk away due to variety of reasons. He opened up with Oprah about the challenges of the show and how they are trying to manipulate him. Chappelle then stated that he doesn't want any part of it. He precisely explained why creative freedom is important to him and doesn't want anybody controlling him.

Dave Chappelle Tells It All

During his interview with David Letterman in 2014, Dave finally answered the questions directly. Letterman asked on why he quit on Chappelle show and this is what he has to say about it. "Listen, here it is. Technically, I never quit. I am seven years late for work," he joked, before discussing the "crazy" label he copped for turning down so much money.

"I look at it like this. I'm at a restaurant with my wife. It's a nice restaurant, we're eating dinner. I look across the room and say, 'See this guy over here across the room? He has $100 million, and we're eating the same entree,'" he continued. "Okay fine, so I don't have $50 million or whatever it was. But say I have $10 million in the bank. The difference in lifestyle is miniscule. The only difference between having $10 million and $50 million is... an astounding $40 million!

The much anticipated return of Dave Chappelle started by hosting SNL. Fans and celebrities alike were happy that the comedic genius is back doing what he loves. He might be out for about a decade but he's still the same. His timing, demeanor and downright hilarious punchlines captivated the audience and viewers. Dave Chappelle is the realest comedian in the game as he demonstrated during his opening segment in SNL. After the show, SNL garnered its highest rating after half a decade. This is why Dave Chappelle is a legend.

Arrow Season 5 Spoilers: Deathstroke Is Back With Vengeance, Things Will Get Very Ugly

Arrow Season 5 Spoilers: Deathstroke Is Back With Vengeance, Things Will Get Very Ugly

It seems like Azealia Banks went wild in her recent Instagram Story shooting fire on Doja Cat for being racist, Nicki Minaj for her beef with Cardi B, and even Dave Chappelle for sleeping with her.