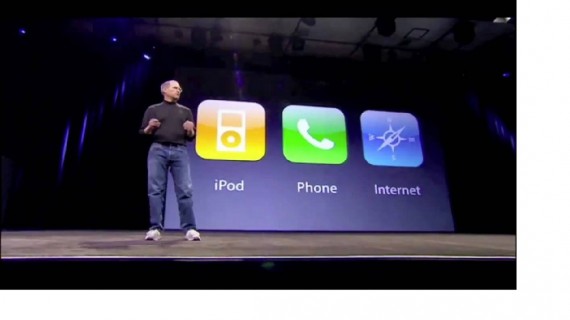 When Steve Jobs Was exiled from Apple, the company lived a very dark period in which it wasn't successful anymore, and the news that everyone heard about it wasn't precisely good or endorsing.<br /> (Photo : Youtube/superapple4ever)

There´s no doubt that Apple is one of the most important tech companies in the history, not only because of its products´ greatness, but also because some innovation that has change the history. Although the company have such a reputation that no one should have a any kind of doubt when a new product is about to come, there has been predictions so wrong that no one has been able to forget it. Here are the most disastrous ones.

Apple Would Probably Never Come Out With A Cell Phone

The most interesting fact about Apple is that the company has always been characterized for its greatness, which is probably the best reputation that any enterprise could have once it's got some time in the market. However, just as it happens with those who are doing it pretty well, there are going to be many news and article write about it, and probably some of these will be predictions about some of the future products.

Naturally, some of these could happen and some may not, but when there´s a bold statement in the middle the bet gets raised to the point in which if the outcome doesn't turned fit to the prediction, everyone would remember the event and someone would write something about. As you might see, this is exactly what happened with the columnist David Pogue, who wrote in The New York Times back in 2006 that the Cupertino company would never come out with a cell phone.

As everyone knows, Apple ended up developing the iPhone, which has become one of its greatest products ever, and probably the most popular smartphone on earth. Although Pogue failed miserably in his prediction, he later recognized the mistake and explained that the reason why he wrote that, was because he was sure that Apple would not give its veto power over its own software design.

If you thought that the previous case wouldn't have any competition, considering that Apple launched the iPhone, this another prediction was even worst, giving the fact that it was stated that there was not a change that this smartphone would get any relevant market share, or in other words, that this product wouldn't be more than just a boom.

Before I get to the obvious paragraph in which I´m gonna write about how the iPhone became a giant, let me say that what´s even worse about this case is that the one who said it back in 2007 was Steve Ballmer, who at that moment were no more and no less than Microsoft´s CEO. Although he might have his reasons to make such a bold statement, many believed that it was just way to discredit the competition.

Now, the part about iPhone´s greatness: let´s just say that Steve Ballmer failed so wrong that this could even harm Microsoft´s image, considering that the iPhone became one of the Apple´s products with better market share, to the point in which the Cupertino company is now more known for making these smartphones than making computers.

The Most Disastrous Prediction: Only The True Believers Will Buy Apple´s iMac

When Steve Jobs was exiled from Apple, the company had a dark period in which things weren't precisely good, and its weakness was clearly represented in the way in which the press didn´t doubt a second to express that Apple´s future was compromised without its main architect and co-founder.

Once he came back as an interim CEO, there were still some media who´s opinion about the company was skeptical, to the point in which The Boston Globe published on 1998 that the iMac wouldn´t be the big deal and would only be sold to Apple´s true believers, which was another way of saying that it would be a total failure.

What makes this opinion one of the most disastrous Apple´s predictions of all time, and at the same time a statement that was reasonable despite of its boldness, was the company was facing probably its worst moment, and even when there were elements that pointed that the iMac would fail, it turned out one of the best products in Apple´s history, and actually saved the tech giant from a very uncertain future, turning it from a failing company to a colossus overnight. Naturally, this has been the most disastrous prediction made about anything related to the Cupertino company.

Believe it or not, some of the worst tech predictions in the history has been made by people that far from being outsiders, are actually important players in tech business.

Apple Could Be Using Data-Collecting Drones To Beat Google Maps

If the speculations end up being truth, we could be watching the beginning of a new era in the tech world, considering that Google will no longer be the most important player in maps field.