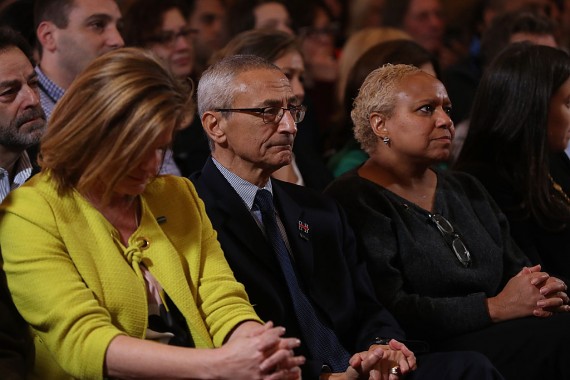 According to many analysts, what was done with the John Podesta´s emails was so incredibly damaging to Hillary Clinton´s image, that this actually become a huge help for Donald Trump in the campaign.<br /> (Photo : Photo by Justin Sullivan/Getty Images)

Unfortunately, cyber criminals have been very famous this year, thanks to a series of hacks that have put in danger not only regular people, but also major institutions and companies who have seen its cyber security being easily penetrated by hackers who have one this operations because of different kind of interests. Although any damaging cyber strike could be done at any moment, here are the most incredible hacks in 2016 so far.

This was definitely one of the most incredible hacks this year, although it wasn't so famous as many others that also occurred, as the DDoS attack made to major web sites as Spotify, Netflix, Twitter or GitHub. The thing was that twenty hotels in which there were included many famous as the Marriott, Hyatt, Starwood and Intercontinental, detected malware on their payment systems. Naturally, this included spas, shops, and bars across the whole U.S., which obviously mean a lot of money involved.

According to many details that have recently been released about the hack -which was originally discovered back in June- the hackers could have stolen customer´s credit card expiration dates and verification codes, as well as their names and account numbers. The most delicate thing about the situation is that the breach size has been impossible to calculate, since many of the cards were used multiple times on a daily basis. According to Reuters, around 8,000 transactions happened during the hack at the Hyatt in California, and around 12,800 at the Intercontinental in Tampa.

I know this definitely look like some kind of unfunny joke, considering that imagine a cyber criminal trying to hack MySpace looks sad and depressing. I mean, this could have been the real deal back in 2006, but considering that MySpace is like some kind of social media mummy, the first thing anyone would think is that the hackers must be out of their mind when they decided target this platform instead of any other,.

However, we actually were the dumb and they were the intelligent in this situation because of a little simple fact: no matter how long ago you used your MySpace, your entire information exists over there, and guess what? If any hacker decides to go there and look for it, it would like assaulting an empty bank with a lot of money on it. Of course, this situation ended up happening and two hackers known as Peace and one of the operators of Leakedsource, stolen more than 350 million accounts, including passwords and email addresses, which were tried to be sold for $2,800.

The Most Incredible Hack In 2016: John Podesta´s Emails

Without any kind of doubt, this was the most incredible hack that we have seen in 2016, not only because of the controversy that created, but also because of its consequences. The hack was made to the email of Hillary Clinton´s campaign chairman John Podesta, stealing thousands of classified documents related to the Democratic nominee, that were published by the non-profit organization WikiLeaks.

Weeks after the hack and the publications, the U.S. government blamed Russia for being behind the hack, in order to interfere with the presidential election with the intention of getting Donald Trump elected. Of course, Russia denied the accusations and the opinion were divided between those who though that Obama´s government was saying this to decreased the damage that documents were doing to Clinton, and those who said that WikiLeaks was working with the Kremlin.

When the election was over and Donald Trump were elected, a Russian government´s analyst confessed that they might helped the radical transparency organization, and the NSA chief told that there were clearly foreign state-party involved in Podesta´s hack. Although there are no major evidences that shows who did this operation, the true is that it ended up determining the U.S. election.

WikiLeaks Releases More Than 2,000 Files Revealing The Cooperation Of Germany Spy Agency And The NSA

Just as it happened with the U.S., WikiLeaks has started to release classified documents about Germany, and the BND President told that Russian hackers would interfere with the elections. Could this be just a coincidence?

WikiLeaks Suffered A Mysterious Outage For 4 Hours: Victims Of A DDoS Attack?

There have been many conspiracy theories regarding some U.S. agencies wanting to take out WikiLeaks, considering that the non-profit organization was blamed for wanting to interfering with the presidential elections.

Although there has been many other reasons for his victory, many believes that Trump was elected because the way he used social media networks as Twitter, since he had the conventional media against him.

Security researchers have discovered a huge database containing some 560 million emails and passwords that were stolen.

Tom Hiddleston Vindicating Taylor Swift: 'She Is An Amazing Woman'

FBI's 'Most Wanted' App Is Out To Catch Criminals

Although this is an incredible app that will definitely facilitate FBI´s work, the truth is that the agency previously released other two apps that were also quite successful in this kind of endeavor.