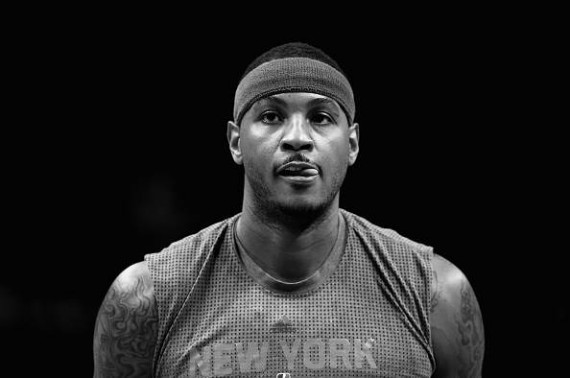 CHARLOTTE, NC - NOVEMBER 11: (EDITORS NOTE: THIS IMAGE HAS BEEN CONVERTED TO BLACK AND WHITE) Carmelo Anthony #7 of the New York Knicks warms up before their game against the Charlotte Hornets at Time Warner Cable Arena on November 11, 2015 in Charlotte, North Carolina. (Photo : Photo by Streeter Lecka/Getty Images)

The Dec. 15 unofficial trade for the 2016-2017 NBA season is almost here and the trade rumor mill is working double time to speculate on several superstars and their possible move. Apart from DeMarcus Cousins who we can say is the darling of NBA trade rumors, several observers are also pitching trade suggestions that involve Carmelo Anthony of the New York Knicks.

Melo may not land a spot on the top ten list when we talk about NBA's best, but he is NY Knicks' top dog. Since the season started Anthony's stints have been recognized, although he has not been performing like he did in the previous years of his career. Maybe because he is aging or maybe because he is in opposition with Knicks President Phil Jackson's triangle offense strategy. Still Melo can definitely bring out a top performer in him and bring a whole team higher on the ladder to the finals.

The NY Knicks are already doing well at this point of the regular season as they are now seated on the third place of the Eastern Conference tied with the Hornets and the Celtics. This is far from their previous standing where they were at the seventh spot. This only proves that Melo's performance has upgraded in their recent games. Although the team is having some issues with their president, the Melo and Porzingis tandem is proving the league that no obstruction can keep them distracted from their goal of beating the Cavs on the Eastern Con finals.

Despite his performance as well as his team's, the trade rumor mill still sees him as a favorite subject with previous reports claiming that he fits better with the Bulls or the Cavs, and the Lakers were also mentioned just recently. Another proposition is currently brewing, suggesting that Anthony will head to the OKC Thunders in exchange for five players consisting of Steven Adams, Andre Roberson, Cameron Payne and Alex Abrines along with the first round draft pick of 2017.

As mentioned, the NY Knicks superstar was initially rumored to flee his team because of Jackson's insertion of a triangle offense to the game strategy of the franchise. He admitted that he is not happy about Jackson trying to enforce what he wants, but the Knicks president has kept silent and allowed the team to play on their own. Still, other teams are eyeing the high-value player and now the Thunders who are struggling at sixth place on the Western Con want to sign him in their lineup.

Melo though has expressed his desire to play alongside NBA's top players including LeBron James, Dwyane Wade and Chris Paul who also happen to be his good buddies. In the Thunders though, Anthony can team up with another superstar who is even catching the attention of analysts for the MVP title this season.

Although the trade deal seems unlikely for the Knicks who do not want to let go of their ace player, Anthony has expressed sometime in the past that he hopes to play with Westbrook and even suggested that the Thunders' point guard could have joined the Knicks roster last summer when he was a free agent. Despite the good offer though, Westbrook decided to re-sign with the Thunders for a three-year contract extension that is worth $85.5 million.

Whether Anthony will take the trade deal suggestion or not is something that NBA enthusiasts will have to see as the 2016-2017 NBA season approaches the February trade deadline.

NBA Trade Rumors: Cavaliers Struggling To Win Another Game; LeBron James To Have A Better Future With The Bulls?

The Cavs previously faced its first three-game losing streak and LeBron James is not happy about it. While he declared that his team will strategize more efficiently in their next games, the NBA trade rumor mill is suggesting a deal that involves him and his ex-team mate, Dwyane Wade.

The NBA trade rumor mill is now focusing on NY Knicks superstar Carmelo Anthony. Talks are rife that the NBA All-Star player will join LeBron James in the Cavs or Dwayne Wade in the Bulls.