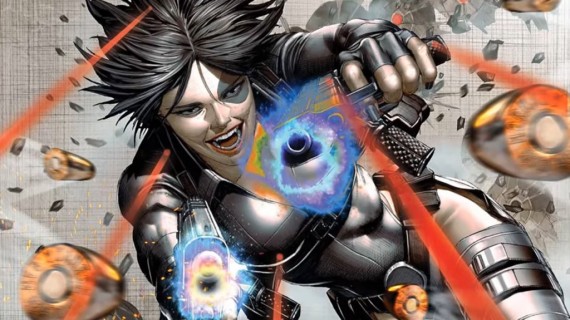 Ryan Reynolds has revealed updates on the awaited sequel to "Deadpool". He also further hinted that Domino and Spider-Man might just be in the upcoming Marvel movie. (Photo : The Superhero Podcast/YouTube)

Entertainment Weekly has just hailed actor Ryan Reynolds as the entertainment of the year for the various movies he has starred in 2016. One of his notable projects was, of course, the breakthrough movie, “Deadpool”. The said actor dishes out on the sequel and the possibility of a new Marvel character being introduced.

“Deadpool” was the film that redefined the world of superhero movies after delivering a successful portrayal of one of the most popular anti-hero protagonists in the Marvel universe. The movie did so well in the box office that it shattered records as it earned a total of $782.6 million against a production budget of only $58 million. It became the seventh highest grossing movie in the world for the year 2016 and surpassed the records held by “The Matrix Reloaded” and “X-Men: Days of Future Past”.

With such success, it was no surprise that a sequel would be in the works. The sequel to “Deadpool” was confirmed in April 2016 by Fox and also revealed that Ryan Reynolds and T.J. Miller will return to reprise their roles. Reynolds further shed light on the sequel just recently and said that “Deadpool 2” is still in the development stage but it is about to move into production.

He also revealed that the production team was looking into introducing a new Marvel character, Domino in the sequel. Domino, also known as Neena Thurman, is a telekinetic female mercenary who had a rough past after being experimented on to become a super soldier like Captain America. Surviving the experiment, she gained powers, became a mercenary, and joined the X-Men.

Deadpool and Domino first met in the comics “Deadpool” Volume 3 No. 16-17 when X-Men was considering to offer Deadpool a spot in their group. In the comics, Deadpool tried to join the group but Cyclops who was skeptical of him refused him and even went through the trouble of sending out Domino to kill Deadpool. This edition showed a whole new side of Deadpool actually impressing mutants so he can be part of X-Men.

Though this has not been confirmed yet, it would be great to see another new Marvel character, let alone a female superhero being introduced. It has been reported that as of October 2016, several actresses have already auditioned for the role of Domino. This evidently leads up to a conclusion that Domino will most likely appear in the sequel.

It was also recently reported that producer Simon Kinberg has also talked about the possibility of a crossover featuring Spider-Man. The Marvel characters had met a few times in the Marvel universe comics and they share an interesting friendship. With a new Spider-Man movie in the works, which has been titled “Spider-Man: Homecoming”, this idea might not be farfetched at all. Besides, Marvel has always been on making crossovers to improve storylines and attract more viewers.

Aside from that, Kinberg also said just last month that the “Deadpool” sequel is looking into assembling the X-Force team. More details and the release date of “Deadpool 2” has yet to be announced. Meanwhile, actor Ryan Reynolds, who plays the role Wilson Wade and his alter ego Deadpool, is currently working on two movies slated for 2017.

Vin Diesel dished out that Groot and Rocket Raccoon might just star in a spinoff movie and also hinted that the fight between Hulk and Groot is just around the corner.

Deadpool 3: Could Marvel and Disney be "Dragging" the Sequel?

It seems that Rob Liefeld is not too optimistic about Marvel's Deadpool 3 after previously almost losing Tom Holland's Spider-Man to Sony.