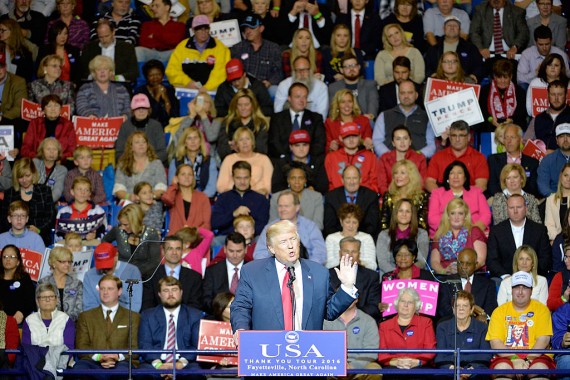 FAYETTEVILLE, NC - DECEMBER 06: President-elect Donald Trump addresses an audience at Crown Coliseum on December 6, 2016 in Fayetteville, North Carolina. Trump took time off from selecting the cabinet for his incoming administration to celebrate his victory in the general election. (Photo : Photo by Sara D. Davis/Getty Images)

The 2016 U.S. presidential election was characterized by many things, but one of the most interesting was the differences between Hillary Clinton and Donald Trump supporters, to the point where many types of research have been made in order to determine the complexity of this social phenomenon in particular.

Far from limiting to the ideological field, both groups of voters also showed many differences between each other in areas like most watched TV shows, favorite food chain, and favorite smartphone brand. This last study showed that while those who voted for Clinton prefers the iPhone, Trump supporters prefer Samsung mobile devices. Although it wasn't explained the reason for this issue, here are some details that could explain this curious situation.

The San Bernardino Case Was Strongly Criticized By Republicans

This was a delicate case whose outcome was a rough battle between the Cupertino company and the FBI since the agency wanted to unlock the shooter´s iPhone in order to get to his information and get to know more about crime. However, Apple decided not to cooperate, because it claimed that this would set a precedent in which any agency could get into the customer´s phone very easily.

Naturally, this generates a huge concern about privacy and there were many people who actually agreed with Apple´s position and get to the streets to protest against the FBI. Meanwhile, many republicans -in which there were already many Trump supporters- considered that this was the disastrous stance of the Cupertino firm since this was an extraordinary situation in which the main issue was people´s security. In fact, every single republican candidate supported the FBI and strongly criticized the tech company because of its decision of not to cooperate.

Another huge issue about Trump supporters and Apple´s iPhone is the fact that the Cupertino company´s CEO Tim Cook has always shown his support for the Democratic candidate Hillary Clinton. In fact, he actually was hosting a fundraiser for her, and even was one of the main candidates that she had for the Vice Presidency.

Although this doesn't seem as a good reason for not buying a product, the thing is that this was one of the most controversial elections in U.S. history because of how polarized was the country, which had as a direct consequence the fact that anyone who endorsed Clinton was seen as some of the kind of Pariah by Trump supporters, and vice versa.

In matter fact, one of the main controversies that the tech world had during the U.S. presidential election was the Peter Thiel´s episode, in which Silicon Valley treated him like a Nazi just because he supported the republican nominee and gave a millionaire donation to his campaign. Taking a good look at the whole picture, the fact that Trump supporters prefer Samsung mobile devices over the iPhone it could be considered as something extremely normal.

Trump Supporters Hates That Apple Products Are Made In China

Every single candidate had its own external enemy to blame for every single thing and reunite forces against a common cause. It is a very antique political strategy, and democrats had the Russians and Trump had the Chinese. In fact, both candidates showed its true colors in this issue in the presidential in which Trump said that the DNC hack could have been done by a China´s hacker.

When you combine his animosity with the Asian government and the previous reason why Trump supporters prefer Samsung phones instead of iPhones, the fact that Apple made its products -and especially its well-known smartphones- in this country is like throwing a gasoline tank or a nuclear bomb to a house in flames.

There´s even more if you add that one of Trump´s main promises has been to decreased the misemployment rate by getting the Cupertino company back to America to manufacture its products. In short, in addition to the fact that Samsung smartphones are extremely great, and the eternal dispute between android and Apple users, the real thing reason why Trump supporters doesn't buy too many iPhones is just mainly because of the way in which the tech giant entered into one of the most controversial and polarized presidential elections in the history of the U.S.

When everyone was blaming Russia for the Podesta´s emails hack, Trump said that those who were behind this cyber crime could be Chinese hackers, or a very obese person laying on a bed.