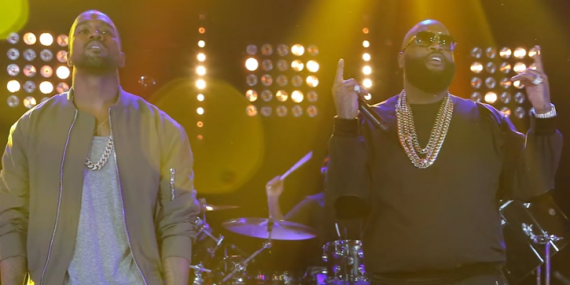 Could Kanye West's hospitalization a hoax? Rapper Rick Ross claims everything was an act. (Photo : ComplexNews/YouTube)

Now that Kanye West is out and about, the former rapper also welcomes his new set of controversies. And it looks like his colleague Rick Ross is on the brink of betraying him.

“One time for Yeezy. My homie a genius. For everybody who thought he was wigging out, he played y’all.”
Did Ross just say that Kanye’s hospitalization is a hoax and he just acted everything to make the public believe that he badly needs treatment? What could be Kanye’s reasons for doing so?

While it’s too early to jump into a conclusion that his nervous breakdown is fake, Ross’ collaboration with Kanye in the past can be a hint that he might be telling the truth. Interestingly, when Ross made his comments, he was spotted standing next to Mike Dean, a frequent collaborator of Kanye, who presumably was laughing with Ross.

To recall, Kim Kardashian’s husband shocked the entertainment industry, especially his supporters when he was hospitalized for a mental health condition. Reportedly, “The Life of Pablo” hit maker is treated for his psychotic behavior. The hip-hop star is said to have suffered dehydration and sleep deprivation.

A source cited that business in the fashion industry is "brutally difficult" with the grueling internal and external issues that can be draining. Highlighted is his $53-million personal debt. When he talked about it on social media, many found him to be bold and fearless with his revelations.

Ross statements are but jokes, possibly. Following his admission to the hospital, Snoop Dogg released a video that shows him hitting Kanye hilariously and calling the “Love Lockdown” singer crazy. The video raked millions of views, as most of them found it to be funny. However, Lady Gaga, despite not liking Kanye, asked the press and the fans to be polite and loving.

"While I don't agree with everything he does I hope the public shows compassion and [love] for @kanyewest and each other," Lady Gaga tweeted.

Unmindful of the speculations against him, Kanye West is back in New York city. He was seen on Monday with Kris Jenner's boyfriend Corey Gamble. Kanye is sporting his most comfortable outfit as he stepped out of the Waldorf Astoria hotel. He was wearing gray sweatpants, a hoodie and a dark windbreaker jacket.
Now, we have Yeezy back. Hopefully, he’s fully recovered from his physical and emotional battles. It would be unfair for him and his family to be judged of playing everyone despite his personal and professional challenges. As the song goes, “Even the best falls down sometimes...” so as Kanye West. After all, he’s an ordinary guy when the glitz and glamor of the entertainment world are turned off.

Guess his comeback in music is nothing short of grand and ambitious. Just as it has always been. Then, welcome back multi-talented Mr. West!

Young M.A.: Get To Know The Rising Rapper In 5 Amazing Facts

Young MA is taking the hip-hop industry by storm with her unique appealing rapping skills. 5 interesting facts about the young artist will engage her supporters to support her music more.

President-elect Donald Trump once endorsed Eminem in a historical convention that could have been a life-turning event to the famous rapper.

The rumors are actually true as Kylie Jenner has a new boyfriend in the name of Travis Scott. Also, Tyga seems to have moved on as well when paparazzi caught him with another woman.

Kylie Jenner is reportedly making her own reality series which will serve as "Keeping Up with the Kardashians'" spinoff. The matte mogul's new show is said to ask rumored ex of Kylie, Tyga, to appear as their roller coaster relationship is expected to be featured in the series.

Blac Chyna Loses Chance To Become A Kardashian; Will The Kardashians Ever Accept Her?

Blac Chyna's application to register the Kardashian trademark name as her own has just been denied, making the legal battle a win for the Kardashians.