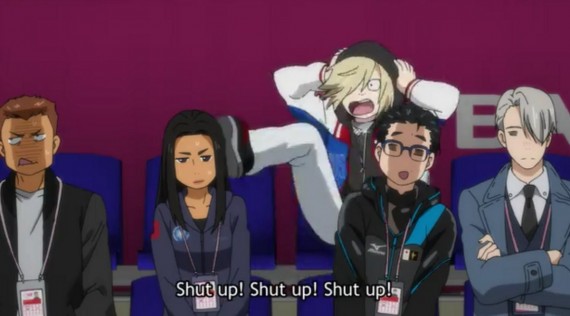 Yurio was annoyed for the loud cheers for JJ in "Yuri!!! on Ice" episode 11. (Photo : Yewani/YouTube)

Yuri had to go first in "Yuri!!! on Ice" episode 11 because he was the last in standings. Those rings were really scene stealers; Mickey even wished he had one with Sala. The performance was perfect except for the quad flip he did at the last moment. The anguish on Yuri's face made Viktor think about the past.

As it turned out, it's not just Yuri who was thinking of leveling up his performance; almost all of them did. Phichit's lively performance was a blast with the audience but it lacks technical difficulty so he had a score lower than Yuri's. It's Yurio's turn next. I liked it how he told Yuri and Viktor to stop their kiss and cry before going to the rink.

He was literally shining, I got goosebumps from his performance. He also landed all the jumps perfectly. Yuri noticed Viktor was missing and he saw him watching Yurio's performance up close. He was about to call him but stopped after seeing the mesmerized look on his face. Was he jealous? Yurio's score of 118.56 surpassed Viktor's previous record in the Grand Prix Final. The youngest athlete is now leading the competition in "Yuri!!! on Ice" episode 11.

Chris had a mixture of agape and eros in his performance. He had a miss in the last jump but his score is still higher than Yuri's. Yuri didn't fail to notice Viktor enjoying the performance. This seems like a bad premonition.

Next is Otabek. I loved Yurio's intense cheering that surprised Yuri. His jumping ability was top notch and he landed all of them perfectly. We had some flashback on how he first met Yurio. It was said that he wasn't famous when he was in the juniors. Viktor remarked his performance is exotic and fresh. He is currently in second place.

JJ was the last to go. He looked very confident but as he was doing his first jump, an image of Otabek's perfect jump flashed to his jump and the combination was turned into one jump. His triples and quads turned to singles as well. He continued to skate and Yuri was reminded of his old self. JJ looked very dejected being in last place but the audience especially his fiancee continued cheering for him. The whole place echoed JJ's name much to Yurio's annoyance.

There's a lot of time left after the closing theme so there is definitely some hidden bomb here for "Yuri!!! on Ice" episode 12 -- I can smell it. Yuri was shown in an interview saying, "I'll go for the gold with my free skate." The next clip shows Yuri and Viktor back in their hotel room. Viktor asked Yuri what was the important thing he was going to say and Yuri said nervously: "After the finals, let's end this."

What is going to end? Their coach-athlete relationship or the other one? It was followed with Yuri narrating on the background: "The final event Viktor and I will face together is about to begin." Oh no! Now, I really want to smash my laptop. My heart is shattered in pieces.

The preview for "Yuri!!! on Ice" episode 12 features Yuri before he enters the rink with Viktor on his side, maybe for the last time. Yuri looks so confident, the air around him is different from the previous competitions where he was always nervous. Maybe he still got a chance! However, the score difference between him and Yurio is almost 20 points so it would definitely be a tight match.

The Grand Prix Final is approaching, so here is a rundown of six finalists competing for the gold medal in "Yuri!!! on Ice" episodes 11 and 12.

"Tokyo Ghoul" live action movie released a visual featuring Ken Kaneki in his iconic one-eyed ghoul mask. A two-minute video of the film will be relesead as the Jump Festa 2016.