Pokemon GO: How Niantic Can Make Its Christmas Event Better 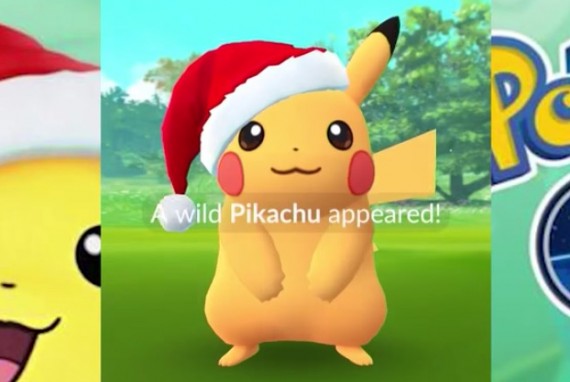 The limited edition Santa Hat Pikachu will be removed from the game soon, and some fans are speculating if Niantic will continue this trend since it was indeed a very great move. Meanwhile, here are the three possible limited edition Pikachu that are to be added in Pokemon Go's future in-game events. (Photo : IGN/YouTube)

Pokemon GO recently dropped its Christmas event with the latest update. While players were expecting a slew of promos and limited-time content, we only got a Pikachu wearing a Santa hat. It's adorable, sure, and understandable since it's the official franchise's mascot. Yet, Niantic can do way better than that. With just a little effort, they can make their Holiday event really one of a kind.

Spread The Pokemon GO Christmas Event Feel To Other Monsters

First off, I think we all want Niantic to spread the Santa hat. As of now, only Pikachus can be caught in the wild with the festive accessory, but we want to see more. Aside from Raichu, it would be awesome to see Snorlax with the hat, but let's take it further and equip it with a Santa beard as well. I'm okay with just those two even without a red jacket.

Come to think of it, Diglett and Dugtrio would be perfect for the Santa hat, too. Those bald little critters ought to have some covering on their heads (and please let it not be golden flowing hair). Unfortunately, I think Niantic wants to focus on adorable and cute Pokemon instead, which is no fun.

The Pokemon GO Christmas Event Should Give Us Gifts

It's the gift-giving holiday season, so we Pokemon GO players demand gifts. What's the use of a Christmas event without a little something beneficial to players? A Pikachu with a Santa hat looks damn cute, but what does it do aside from brightening up our inventory? Nothing. The accessory does absolutely nothing. Not even a boost in stats.

Niantic, hear me out: what if Pokemon bearing gifts spawn randomly? Complete with a Santa hat and maybe Christmas lights, these Pokemon will come with wrapped boxes and if you catch them, you also get the gift.

The gifts would also be random: an Incense, a Pokemon Candy, an Incubator, a limited edition clothing for your avatar, potions, Poke Balls or even an Egg with a rare Pokemon inside! The possibilities are virtually endless, so there's no excuse for a sloppy Pokemon GO Christmas Event.

Or You Know, Just Give Us The Pokemon GO Features We Want

We have been asking and asking for trading, PvP and other mainstay features of Pokemon games, but instead Niantic chose to prioritize a partnership with Sprint. For this holiday, can the guys over there just give us what we want? It would be one of the best Christmas gifts ever.

I'm not saying that Niantic isn't already thinking of these things. Who knows, maybe Santa Hat Pikachu is just a taste of what's to come for the Pokemon GO Holiday event. We have about 10 days before the actual Christmas Day, so I'm keeping optimistic that we will get something pretty cool soon.

Pokemon GO Guide: How To Get Santa Hat Raichu In Christmas Event

We all know we can catch Santa Hat Pikachu in Pokemon GO's Christmas Event, but can we get a Santa Hat Raichu as well?

Pokemon GO Generation 2 Update: Everything You Need To Know About Baby Pokemon

Pokemon GO just received its new update that brings Gen 2 Baby Pokemon. Here's everything you need to know about these cute little critters.

The Pokemon GO latest rumor suggests that a rare Shiny Pikachu is coming. There are speculations that Niantic will release this rare Pokemon during its first-year anniversary event.