NBA Trade Rumors: Andrew Bogut To Leave The Dallas Mavericks; Which NBA Team Has The Best Offer For Him? 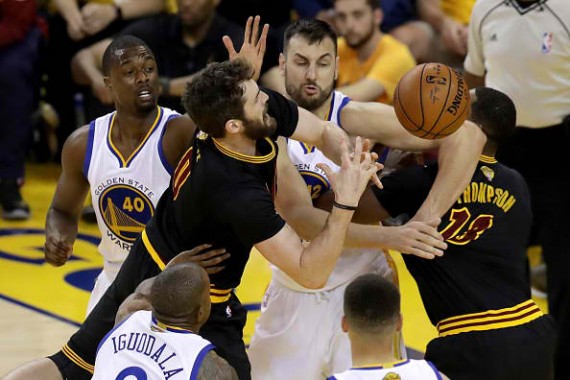 OAKLAND, CA - JUNE 13: Kevin Love #0 of the Cleveland Cavaliers goes up for a shot against Andrew Bogut #12 of the Golden State Warriors in the first half in Game 5 of the 2016 NBA Finals at ORACLE Arena on June 13, 2016 in Oakland, California. (Photo : Photo by Ronald Martinez/Getty Images)

The 2016-2017 NBA season is still nowhere in its mid which means the teams still have a lot to sweat before they see the final results of the regular season. This also means that there is still a lot of time to fix what is needed to be fixed most especially for the teams who are currently sitting at the bottom of each conference. As for the Dallas Mavericks, it seems that their 6-20 record won't give them any chance at the playoffs - again - this season. And what might be more embarrassing here is that they are currently tied with the 76ers at the last spot as a whole.

As soon as the unofficial trading season came last Dec. 15, several teams are trying to fix their lineups to develop them into strong playoff contenders. The GSW and the Cavaliers are seeing no problem as they are cemented at the top of their respective conferences, but as for those at the bottom, is it already time for them to give up on this season? Will trading for better players give them the slightest chance at the playoffs? For the Mavs, I guess it won't be the case.

The Mavericks have been playing most of their games without Dirk Nowitzki. He has been through so much injuries that most of his time were spent for recovery rather than playing for his team. Releasing Bogut then might hurt the Mavs even more but if they can find a good trade deal, then they might find a chance to at least finish the season at a spot higher than the bottom.

Analyzing Bogut's performance, he is still good in defense but his injury history has been pulling his numbers down. Not to mention that he is only making a ridiculous 3.8 points in average per game this season. His rebounds though are more impressive as he is making 10.4 percent per game.

It is also pointed out by several NBA analysts that for a team to fully make use of Bogut's talents, his health will have to be their priority as his age is making him more prone to injuries. Hence with this scenario, even if he is going to be under unrestricted free agency in 2017, it might be difficult to find a team who will trade for him in exchange of a better player that the Dallas needs.

There are some teams though who are reportedly showing interest in acquiring Bogut. The Celtics and the Trail Blazers were recently mentioned on some NBA trade rumors who are said to be looking into acquiring either DeMarcus Cousins or Bogut. With the condition of Bogut though, it will be better for a playoffs contender to get the Mavs' big man.

Looking at the standing of these two teams, it will be more viable for the Celtics who are currently at the third spot of the Eastern Con's standing to insert Bogut in their roster. The Trail Blazers are still in for the Western's top 8 but they have to give up an ace player or several potential superstars in order for the trade to follow NBA's salary cap and trade rules. This might be risky for the team who is struggling to keep its spot on the top 8.

If the Celtics are to acquire Bogut and let go of Al Horford, do you think it will be a sacrifice-worthy trade?

Stephen Curry is being rumored to flee his team in 2017 and could possibly go to the Bulls to join Dwyane Wade and Jimmy Butler. The Bulls are currently working on their defense strategy but are also speculated to be looking for additional efficient shooters.

The Boston Celtics are a hot subject of the NBA trade rumors currently spiraling. According to these rumors, Anthony Davis, Andrew Bogut or DeMarcus Cousins could possibly seen heading to the Celtics before the trade deadline.