What To Expect From Google's Expansion Into Hardware? 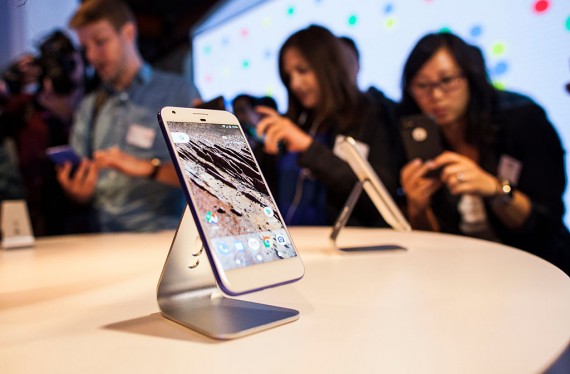 Google unveils new products that show its plans of making a jump into the hardware market. (Photo : Photo by Ramin Talaie/Getty Images))

Google's first step into the hardware market has been made when the company has purchased Motorola in 2011 for $12.5 billion.

Since Google has made its first step into the hardware market, the company shows its clear plans to expand on this new niche. And when a company on the scale of Google decides of getting involved in hardware, such plans certainly put some established manufacturers on edge. However, according to PC Mag, when Google later sold Motorola to Lenovo anxiety went down.

Google has continued to expand its influence over the market, without being directly involved in hardware production. Many hardware maker companies supported Android early on. That helped Google's mobile operating system to become the de facto alternative to iOS. Today, Android is the mainstream mobile OS and smartphone maker companies have no choice but to embrace Google.

But, according to Venture Beat, the development that is most alarming for the tech world is Google's recent launch of the Pixel smartphone. With missteps from Apple and Samsung providing an ideal window for the new device, Google's Pixel launch has become a true market success.

According to Wired. Samsung struggles with the biggest manufacturing mistake in the history of the mobile industry. Meanwhile, Apple has been less successful than the high-tech giant expected with its release an iPhone without a headphone jack. In this market conjuncture, the conditions are ideal for the Pixel's success.

According to the International Data Corporation, with about 88 percent of the market, Google has a near monopoly of the mobile operating system marketplace. This gives the company a strong base for its efforts to dominate the hardware arena.

Smartphone maker companies such as LG, Samsung, and others have come to rely on the Android OS. Once Google begins to give its own devices preferential treatment through new features and software updates, they will have no way to compete.

The launch of Google's Pixel pushes companies such as LG and Samsung to seek business outside of the mobile marketplace. Because Google can leverage the huge data in its ecosystem, the company's products differ from competitors. For instance, the Pixel's Google Assistant artificial intelligence surpasses Apple's Siri and Microsoft's Cortana by personalizing every interaction based on users' existing Google accounts.

With its intuitive and essential services, Google has attracted billions of users, enjoying an incredible advantage over competitors. Some tech analysts have dismissed the threat of Google's hardware ambitions, based on legendary smartphone failures from Microsoft and Amazon. Other tech experts believe that Google's hardware push would not catch momentum because of privacy concerns raised by company's growing digital hegemony could lead to consumer backlash.

However, the middle ground of these expert opinions would signal that it is a mistake to see Google's focus on hardware as a market disruption. The mobile marketplace could gain from a new competitor, the Google Pixel smartphone.

The Pixel smartphone is part of new Google products that aim to spread on various verticals. For instance, Google Wifi aims to make other Internet routers obsolete, Google Home competes with Amazon's Echo and the Google Daydream headset could become a success on the emerging VR market.

Google Wifi router is a new approach to home Wi-Fi.

While being a really good high-end smartphone, Google's Pixel does not perform as good in terms of money making for the company.