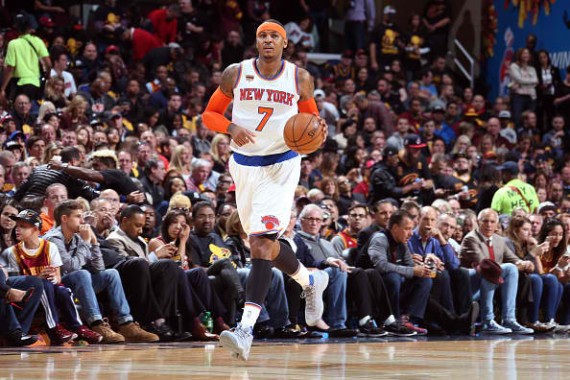 The cold war between the NY Knicks' president Phil Jackson and its superstar, Carmelo Anthony, seems to step up another level as Jackson won't stop commenting about his team's small forward. While Melo signed a five-year extension with the Knicks in 2014, things inside the franchise might just lead us to see the superstar playing with another team as the 2016-2017 NBA season continues.

Reports have been coming out since October about Jackson insisting his triangle offense strategy to his team. The set-up worked for him during his time with the Bulls where Michael Jordan was still an NBA star, but times have changed and his current team is trying to work on something else which he just won't allow. Carmelo is known for being a good scorer and for his crafty offensive moves. He is clearly not in favor of Jackson's triangle offense and is inserting his own moves in their games which is actually effective as the Knicks are still in the playoffs picture.

As Melo contradicts the strategy where he became prominent, the New York Knicks president has been talking against some NBA players connected to Melo, pointing out the errors the present-generation players are doing inside the court.

Of course, Carmelo has not been exempted to the NY Knicks' president's bitter-talking since he was directly mentioned by Jackson in his previous seemingly negative comment. Though it is unclear whether the statement is a compliment or not, the fact that Melo is trying not to comment back as he looks annoyed might be taken as a sign that Jackson is indeed speaking against his very own player. Although the comments are not personal and are pertaining to Melo's games, Jackson is still being notorious in speaking his thoughts without considering others' feelings.

"He can play that role that Michael Jordan and Kobe Bryant played," Jackson said, as cited by CBS Sports. "That's a perfect spot for him, to be in that isolated position on the weak side. Because it's an overload offense and there's a weak-side man that always has an advantage if the ball is swung," he added. This has led many NBA fans to think that Jackson is criticizing Melo's style of holding the ball for quite too long.

"Carmelo, a lot of times, wants to hold the ball longer than -- we have a rule, if you hold a pass two seconds, you benefit the defense. So he has a little bit of a tendency to hold the ball for three, four, five seconds, then everybody comes to a stop," Jackson continued. He then tried to speak lightly about Carmelo, saying: "That is one of the things we work with. But he has adjusted to it, he knows what it can do and he's willing to see its success."

This unconfirmed feud is sparking several trade rumors involving Carmelo where the disagreement between him and his boss was always pointed out as the reason for his move. Previous reports claim that the nine-time NBA All-Star player will opt out of his contract extension and might head to the Lakers or the Celtics or the Thunders. None of these were confirmed but fans are excited to find out what his future with the Knicks will be this season.

The NY Knicks are now at the sixth spot in the Eastern Conference, dropping to three levels as they already managed to nab the third earlier in the regular season. Looking at Melo's performance, he has been one of the core of the present-day NY Knicks and he is definitely among the best players in the league. His team might not be stable in its ranking but it is consistent in being within the East Con's top 8.

The 32-year-old player's contribution to the Knicks is undeniable most especially that he is working alongside a potential superstar, Kristaps Porzingis, and another veteran, Derrick Rose. Whatever these three are up to with their offensive play, they are certainly effective but might need some alteration as their win-loss record is already almost tied up at 14-13.

Carmelo can make a move and Jackson might not deem it a loss to the Knicks given their working relationship's status. Yet if he ever makes a move this season, the team who will pick him up is still not certain as the teams previously linked to him have ignored those trade suggestions.

The NBA trade rumor mill is now focusing on NY Knicks superstar Carmelo Anthony. Talks are rife that the NBA All-Star player will join LeBron James in the Cavs or Dwayne Wade in the Bulls.

NY Knicks' Carmelo Anthony is once again the subject of NBA trade rumors which suggest the player leaving his team to join Russell Westbrook in the OKC Thunders. Although the suggestion seems to be impossible at this point of the regular season, observers are expecting to see a move as the February deadline approaches.