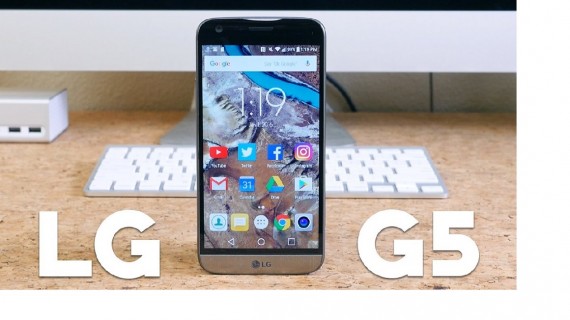 Although this is one of the most incredible smartphones that we saw this year, the LG G5 is not exactly the most famous among the customers because of a lot of reasons. (Photo : PhoneDog/YouTube)

The LG G5 is one of the most incredible smartphones of 2016, thanks to incredible specs and features that made this mobile device into something out of this world. Although its quality is undeniable, this smartphone has been characterized not only by its awesome details but also for being a product that didn't earn an attention that corresponded to its greatness. Given this fact, here are three reasons why the LG G5 was the most underrated flagship this year.

The LG G5 Had Great Specs And Features

There´s not a single smartphone that could be underrated if it doesn't have outstanding specs and features, and the LG G5 is not exactly the exception in this case, given the fact that we´re talking about a mobile device that offers a great performance, a nice camera of 16 MP and the possibility of removing its battery. This can easily be considered as an innovative feature, considering that almost every single smartphone in the market lacks a removable power back.

The screen size of the LG G5 is 5.3-inch with 2560 x 1440 resolution, with 4GB RAM and 32 GB Storage.  It also applies the Android Marshmallow as its operating system and a front camera of 8MP. One of the most controversial details of this smartphone is its design, considering that its dimensions are 149.4 x 73.9 x 77mm. Nevertheless, these specs and features are more than enough to make the LG G5 a more important and famous product.

This year is one of the most important periods of smartphone´s history since we watch the release of the almighty iPhone 7 and the fall of Samsung because of the Galaxy Note 7 recall. Naturally, both events gained the entire media attention, which had a particular consequence to the products that weren't famous in the public eyes like in the case of LG G5.

Boasting excellent specs and features to become one of the most relevant products of 2016, media attention was mainly focused on Apple´s latest flagship and the Note 7 fiasco, which pushed the LG G5 to an irrelevant position in which a huge amount of customers didn't know anything about this smartphone. This is one of the most important reasons why the LG G5 is the most underrated mobile device to date since its details were more than enough to achieve a success in the market.

In addition to the lack of media attention, its rivalry with Samsung was extremely damaging for the LG G5, and not because its competitor had exactly an amazing year. Considering what happened with the Note 7, the most common consequence was that the LG G5 achieve an incredible amount of sales in the world.

Although this smartphone sold a lot of units, the number wasn't exactly great, considering that the Note 7 situation was so incredible that the media was entirely focused on Samsung. The delicate detail about this issue is that this company is more famous in the U.S. than LG, so it would have been even better that Samsung didn't experience that problem with its flagship.

Although the Galaxy Note 7 fiasco was a disastrous moment for Samsung, the Galaxy S7 meet expectations and became one of the best smartphones in 2016. The OnePlus 3 was a huge revelation.

Both smartphones have been considered two of the best mobile devices of 2016. Samsung is betting everything on its upcoming flagships Galaxy Note 8 and Galaxy S8 in order to restore its reputation.

Riot Games has finally addressed the error message which players are experiencing whenever they try to either login or create a lobby.