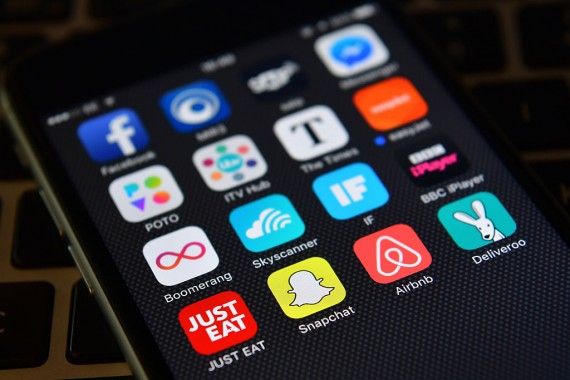 LONDON, ENGLAND - AUGUST 03: The Snapchat app logo is displayed on an iPhone on August 3, 2016 in London, England. (Photo : Photo by Carl Court/Getty Images)

Snapchat integration with Uber enables users to unlock custom filters whenever they book a ride. Theme filters can be used to let connected friends in Snapchat when you are arriving at a location. Another feature of the integration is that users can now use other people as locations when they book their ride, instead of using the usual address on the map.

Users Find Themselves Being Tracked Even Without Using Uber For Weeks

The only problem is that a number of Snapchat and Uber users are complaining that Uber may be tracking them without them giving permission. Uber previously had only access to a user's location whenever they open and use the app. However, a recent software update now allows Uber to gain free access to a customer's location even without using the smartphone app. The Uber app now only gives the options to either get the phone's location data or not at all, which would not be ideal for regular Uber riders.

By switching off the location data on the phone, an Uber user would not be found on the map or through GPS. They would, instead, need to manually change the setting to turn on the location date in order for an Uber driver to find them. And then switch it back off as soon as they are done with using the ride-sharing service. That task alone would be a drag since not everyone has the luxury of time to tweak their phone settings every time they book a ride.

In response to the accusations, an Uber spokesperson said that phone users could easily go to the Location services in their smartphone settings and see that they will only find a purple arrow next to Uber when their location have been accessed. Uber said that the purple arrow can only be seen once the user gives Uber permission to access their location, and may last until they step off the vehicle, denying that they are accessing user location data when not needed.

However, several phone users said that they could see that Uber has accessed their locations even after weeks of not opening the application and not booking a ride with the company. This is alarming as these types of incidents is a direct violation of an individual's privacy and may be security alarming. Uber responded that the location could be found in the phone's map extension, which is set to off by default and could only be activated manually by the user.

The statements from Uber would totally make sense if they were true. Unfortunately, users have also found out that their locations are only being accessed by Uber, and not by other applications that use map extensions. Uber has not released any other statement regarding the issue and did not provide information if they are already investigating the issue. Users may need to think twice first and be cautious until the company provides a solution or completely fixes the privacy issue.

Uber, who recently started rolling out driverless car services in San Francisco, was just caught by camera beating the red light. The dashcam that recorded the incident came from a Luxor taxi, competitor of Uber.

Elon Musk, CEO of the SpaceX program and Tesla Motors, along with Travis Kalanick, CEO of Uber, was just appointed with advisory roles for Donald Trump. How will this decision affect the car industry?

The evolution of ride-hailing services is advancing with companies like Uber and BMW’s ReachNow program. These companies are reaching more locations, this time, introducing autonomous vehicles to their arsenal of cars.