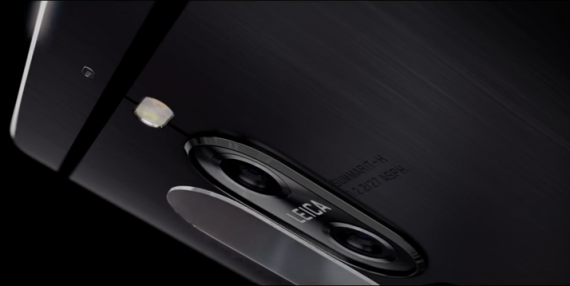 The Huawei Mate 9 Porsche design offers unique features with its impressive specs. The only downside of the latest device is its expensive price that costs $1450-$1500. (Photo : ThePhoneCommercials/YouTube)

Last November, Huawei announced that they were going to release a special edition of the Mate 9 line series.

The premium model smartphone is worth $1450-$1500 and is called the Porsche Design Mate 9. It is said to be released in January of 2017, but there is already a hands-on review featured on a YouTube Channel about the device.

The Porsche Design Mate 9 comes with special items on its packaging. Inside the package, there are premium stereo ear buds. It also has a custom leather flip case that looks decent and gives the smartphone a quite stylish look.

The Porsche Design Mate 9's body dimensions are 5.98 x 2.95 x 0.30 inches and weighs 169 grams. For its back design, it features a brushed aluminum back plate that is bending upwards to meet the gently curved display that is somewhat similar to the Samsung Galaxy S7 Edge's display. However, though it is similar compared to the Samsung Galaxy Edge S7 screens, it has its own subtle difference, because somehow its curved are so perfectly designed that it makes the phone easier to handle.

The only bad side according to the video source is that the back casing has a tendency to hold onto fingerprints and has the tendency to be scratched easily.

The Porsche Design Mate 9 features a 5.5 inch (73.2 percent screen-to-body ratio) AMOLED capacitive touchscreen (16M colors) with a screen resolution of 1440 x 2560 pixels. About what kind of glass protects its screen display, the video source did not mention.

About its screen, it is said to be vivid and also because of its AMOLED display, it has higher and contrasts saturation. It is even capable of split-screens.

The Porsche Design Mate 9 runs on Android 7 Nougat, but no mention if it is upgradable to the latest version of the Android Nougat. It is powered by a Hisilicon Kirin 960, which according to Huawei is a great performance chip. Its CPU power is Octa-core (4x2.4 GHz Cortex-A73 & 4x1.8 GHz Cortex-A53). And its GPU is Mali-G71 MP8.

Unfortunately, the upcoming model has its share of drawbacks.  One is that when a user rotates the phone's screen while playing Spotify tracks, the music skips. Another disadvantage is that when viewing notifications, some messages are cropped. And lastly, there are persistent notifications of battery drains from the apps running on the background.

The internal storage capacity of the Porsche Design Mate 9 is 256 GB. Its RAM storage is 6 GB. And about its external storage, it doesn't have one.

For its camera specs, the Porsche Design Mate 9 features a dual-lens 20 MP rear camera with f/2.2 aperture. It also has an Optical Image Stabilization feature. For its front camera, it features an 8 MP front snapper with an aperture of f/1.9. For its video, it shoots 2160p@30fps and features 4k.

Now, for its camera performance, it kind of 50/50. For taking photos, it delivers great pictures. But in terms of video recording, the Porsche Design Mate 9's cameras struggle with noise, especially with the front camera.

It houses a non-removable Li-Po 4000 mAh battery. Regarding it battery life, there is a specific number for its talk time, standby time, and music play. However, according to the video source, the Porsche Design Mate 9's battery life is impressive because of its 4000 mAh battery and its "Dark Theme" feature that lets the user prolongs its battery life. It also has a Quick Charge feature, but the version was not specified.

Personally, I think it's a cool smartphone to have because there is a sense of exclusivity and it has great specs and features (depending on one's taste). But I would also like to point out that there are a number smartphones out there with similar specs and features that bear a lower price compared to this smartphone. One great example is the upcoming Lenovo ZUK Edge that features 4 GB and 6GB of RAM for only $330-$360. But if you want to buy something available right now, the Google Pixel or iPhone 7 Plus will be a great smartphone also.

Speaking about iPhones, Apple is rumored to launch 3 smartphones next year for its iPhone series for 2017. Among those 3 iPhones, there is one codenamed as iPhone 'Ferrari' as is said to be a premium model. Hopefully, even if Apple plans give the best futuristic smartphone for 2017, they will not sell it around $1,500 and will just stick on a $900-$1000 price range.

Latest news regarding the 5-second bug video that is currently terrorizing iPhone users. Read also which is the better phone between Apple's iPhone 7 and Huawei Mate 9 Pro.

Huawei Mate 9: All You Need To Know

The long awaited Mate 9 has finally been revealed by Huawei and it is receiving positive reviews.

Here are the top 10 smartphones of 2016 with the best cameras. Click to know about its camera specs, launched date and prices.

EaseUS is a software company specialized in free data recovery software for memories such as hard drives, pen drives, with Windows operating system, for Mac, Android and iPhone. In case you have lost important data due to broken Windows registers, viruses, forced to format or delete incorrect data, with EaseUS there are no more problems of this type as it is possible to recover any type of data in very few steps.