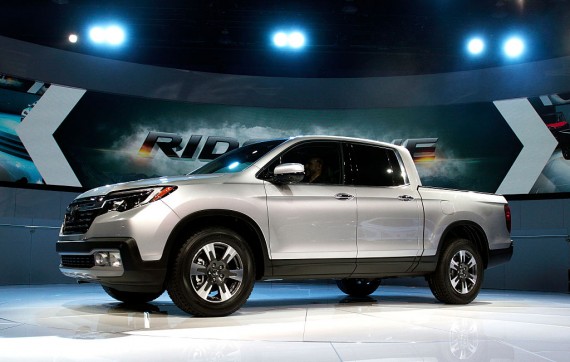 DETROIT, MI - JANUARY 11: The new 2017 Honda Ridgeline midsize pickup truck is revealed to the news media at its global debut at the 2016 North American International Auto Show January 11th, 2016 in Detroit, Michigan. The NAIAS runs from January 11th to January 24th and will feature over 750 vehicles and interactive displays. (Photo : Photo by Bill Pugliano/Getty Images)

Honda Motors Corporation issued an announcement to recall their 2017 Ridgeline pickup trucks. The decision was made after 400 warranty claims that involved irregular manufacturing of the wiring harness. The electrical component was manufactured and supplied by Delphi Automotive.

According to Honda, the wiring harness issue could cause a potential electrical problem. In addition, the wiring problem can cause the possible activation of the pickup truck's brakes. The improper splicing of the wires that was made by the harness supplier may result in moisture to enter the harness and the electrical coupler under the bed. Electrical shortages can occur once moisture invades the wirings. Warning indicators can unexpectedly light up on the dashboard. The worst-case scenario of the faulty wiring harness could cause unintended brake activation through the stability assist system that could lead to a crash.

Around 9200 Honda Ridgeline pickup trucks would be included in the recall, which is the first ever recall reported for the truck model. No injury and fatality had been reported due to the faulty wiring harness. Honda made the announcement to encourage owners of the vehicle in question to bring their trucks to dealerships for servicing and inspection. Affected owners would receive mailed notifications that will begin on the latter part of January 2017. Ridgeline owners who would not receive any notification can still rule out if their trucks are affected by going to www.recall.honda.com or by calling 8882342138.

Honda, with the company's long line of history, has taken every precautionary safety method possible. Most recalls made by the automotive company was caused by other manufacturers or parts supplier, and not directly from Honda. Honda also issued a recall of more than 600 thousand Honda Odyssey units due to a possible second seat issue. The affected Honda Odyssey minivans have second-row seats that may not lock in case of a collision, causing the passengers to have possible injuries once the seats suddenly move forward on impact.

Honda Accords and Civics also had a history of recalls; fault also came from third party suppliers. Honda issued a recall to a number of accords due to faulty airbags that were manufactured and installed by Takata Corporation. For the Civic, Honda found out that there might not be wrist clips installed on the pistons of some models. The lack of the wrist clip could cause damage to the engine, and an increase danger of fire and crash.

A Measure Of Safety

So far, no injury or fatality has been reported from recalls issued by Honda Motors. The company may lack in their quality control since these types of issues should not have come out in the first place if only they had stricter quality control. However, we still cannot let go of the fact that Honda is quick in determining these said faults and is not afraid to immediately plan their course of action. What they lack in the factory gets covered up by their fast response time. Honda is known for making performance and fast cars, and they are also fast in keeping their consumers safe and not wait for anything serious to happen.

The all-new 2017 Honda Civic Si comes with a turbocharged engine and sleek design with loads of features for a good price under $25,000.00.

Most of Takata's obligations are owed to automakers for recalling and replacing millions of its air bags, and the Japanese supplier's restructuring plan relies heavily on financial support from its customers.

This virus is the same one that infected over a million machines worldwide after taking advantage of security holes in some Microsoft products. According to a Honda spokesperson, about 1,000 units were not produced as planned because of the attack.