Top Scandals That Rocked The Automotive Industry For 2016: A New Years Recap 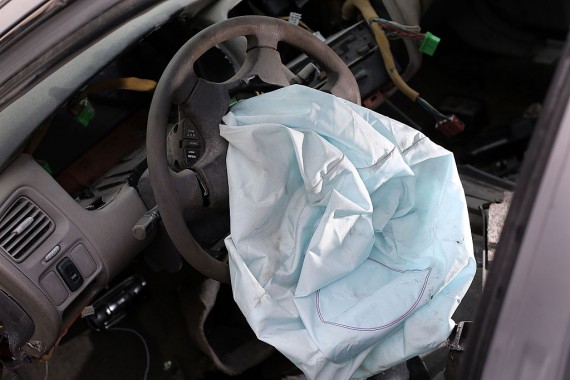 MEDLEY, FL - MAY 22: A deployed airbag is seen in a 2001 Honda Accord at the LKQ Pick Your Part salvage yard on May 22, 2015 in Medley, Florida. The largest automotive recall in history centers around the defective Takata Corp. air bags that are found in millions of vehicles that are manufactured by BMW, Chrysler, Daimler Trucks, Ford, General Motors, Honda, Mazda, Mitsubishi, Nissan, Subaru and Toyota. (Photo : Photo by Joe Raedle/Getty Images)

The car industry has hurt badly in 2016 as scandals, accidents and major recalls came out. Depending on a person's perspective, these could be a good or a bad thing. It may be that quality control is getting lenient, or consumers just becoming more cautious about the conditions of their vehicles. Whichever the cause may be, let us take a look at the major highlights that almost took to automotive industry to a standstill.

Let us start with one of the most prominent and historical figures in the automotive industry. And nothing talks about history other than the German manufacturer Volkswagen. The Volkswagen has already spent almost $15 billion dollars to pacify the diesel scandal that broke out in the latter part of 2015. Thousands of recalls has been issued after finding out of a device that cheats emission ratings for several Volkswagen and Audi vehicle models. A recent announcement also mentions that the German automaker plans to fire around 30,000 of its employees in an attempt to save their finances, while only offering new jobs for only 9000 individuals, which is less than half of the total jobs that would be lost.

Startup tech company, Tesla, has also suffered major loss as their autopilot system gave them several issues this past year. A Florida man lost his life in May when his Model S failed to avoid making the necessary safety precautions and ended up going under an 18-wheeler trailer. Weeks after the fatality, another reported crash happened that involved a Model X that hit a guard rail, also while the autopilot was engaged. Fortunately, no lives were lost during that crash.

Fiat Chrysler recalled more than one million units for vehicles that, according to claims, roll away after drivers step out. Rollaway incidents resulted in 41 injuries, 308 property damage reports and 212 car crashes. The National Highway Traffic Safety Administration claimed that the vehicles in question has a transmission gear selector that causes the incidents to happen, but was denied by Fiat and announced that their vehicles did not have any design flaw. Star Trek actor, Anton Yelchin, lost his life after being pinned against a wall when his 2015 Jeep Grand Cherokee rolled back in June 2016.

Japanese carmaker, Mitsubishi Motors, also had a fair share of scandal for the year 2016. Over the years, the company, made famous by their Lancer Evolution rally cars, has been moving to a steady decline. A scandal that broke out seemed to put the company in an even deeper hole that is not easy to climb back up. Mitsubishi admitted to manipulating data and announced that some of their vehicles can last longer than it should on the road. The vehicle used estimated data instead of actual data and said that the vehicles in question could last up to 25 years, which actually showed lower in its test results.

Takata may be the biggest scandal of them all as the issue about their faulty airbags not only affected their company but a lot of major car brands as well. Takata delivered and installed faulty airbags that can cause to suddenly explode and spray glass shrapnel to the driver and other vehicle occupants. Up to this date, major car brands are still recalling their vehicles to avoid any mishaps and to prevent anyone from ever getting into an accident with the installed Takata airbags in their cars. Car companies such as Acura, Audi, BMW, Buick, Cadillac, Chevy, Chrysler, GMC, Honda, and even Ferrari, among others, has been affected by the faulty and unsafe airbags.

Honda takes another step towards safety as they issue another recall of their vehicles. This time, they are recalling their 2017 Honda Ridgeline pickup trucks for a possible faulty wiring harness.