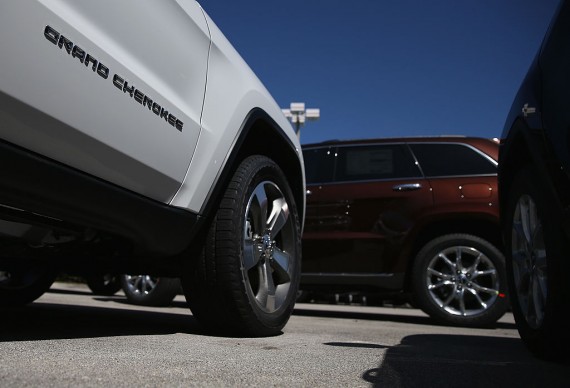 Several models from car brand Fiat Chrysler may be in trouble as the IHHS is investigating cases of faulty transmission. Dodge trucks are included among those that may be subject for recall. <br /> <br /> (Photo : Photo by Joe Raedle/Getty Images)

On December 21, the National Highway Traffic Safety Administration announced the investigation of several trucks and sports utility vehicles from Dodge and Ram. The investigation will cover possible faulty transmissions shifters that may cause the vehicle to roll away even when in the park position. More than one million vehicles will be included in the initial investigation of the Fiat Chrysler vehicles.

The National Highway Traffic Safety Administration has already received 43 complaints coming from owners of the said vehicles. They reportedly said that their vehicles rolled after they shifted the transmission to Park. 25 accidents and 11 injuries have been made out of the 43 complaints. In a statement, the NHTSA said "The reports alleged that the unintended motion occurred after the driver moved the transmission gear selector to park and exited the vehicle "Thirty-four of the reports alleged that the vehicle was moving while the shifter indicated that it was in the park position."

Vehicles With Rotary Shifters Will Be Put Into Investigation

The investigation will focus mainly on Dodge Durangos manufactured between 2014 and 2016 and Ram 1500 Trucks manufactured from 2013 until 2016. Both vehicles are equipped with electronic shifters to change gears. The electronic shifter is looks like a rotating dial that can be found on the center console, instead of the traditional mechanical shift stick that is usually located between the driver and the passenger side on the floor.

Owners Did Not Engage The Parking Brake During The Incidents

Fiat Chrysler may still be able to have a fighting chance with the complainants since, according to Forbes, there was no indication that any of those drivers involved have applied the parking brake prior to the incident. Applying the parking brake, even after shifting the gear position to the park position, is a necessary safety method that car manufacturers have been advising drivers ever since the feature was invented and installed on early cars.

Aside from Fiat Chryslers Dodge and Ram brands, one incident took the life of actor Anton Yelchin after a Jeep Cherokee rolled off and pinned him against a fence. In addition, 2012 to 2014 models of the Land Rover Evoque and the Jaguar XF models also have received similar vehicle rolling away complaints that is also under investigation by the National Highway traffic Safety Administration. The said vehicles are also using rotary shifters with their automatic transmission vehicles. Incidents from the Land Rover and Jaguar vehicles caused four injuries.

The Fiat Chrysler brands, Dodge and Ram, have been the most reliable and safest sports utility and truck manufacturer. The complaints received, along with the investigation that will follow suit, is a bit unexpected for consumers who have trusted the brand for decades. However, some reports are still saying that the accidents happened due to human error, or driver negligence. It may take a while before the stir up gets cleared and it may hurt Fiat Chryslers sales and profit, but the company has showed no sign of denying the possible faults feature in their vehicles. Rest assured that the federal government would work to resolve and to avoid any more injuries from the said rotary shifters.

Uber, who recently started rolling out driverless car services in San Francisco, was just caught by camera beating the red light. The dashcam that recorded the incident came from a Luxor taxi, competitor of Uber.

Startup Tech Company, Faraday Future’s future may not be looking so bright as various suppliers sue the company over unpaid debt. The electric car company may need to rethink their strategy to survive the industry.

Volkswagen, with a scandal dating back to 2015, still not done recalling all affected vehicles and still have court hearings scheduled. Despite all issues, VW is still gaining in sales.

But for automobile industries that have managed to keep their doors open, employees getting coronavirus is one of the risks that car manufacturers face.

Car makers in the United States are experiencing a precipitous downhill drive with U.S. car sales in April dropping by about 4.7 percent. This market slump has been going on for four straight months.