BlackBerry Is Betting A Lot On The QWERTY Keyboard This Year: Is This A Good Or A Bad Move? 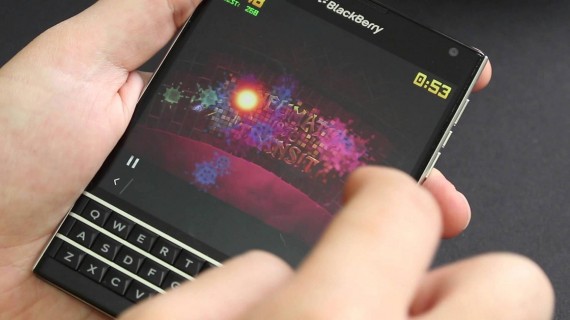 Although the touchscreen is probably the most common feature than any important smartphone has, the next mobile devices set to be released by BlackBerry will keep the old-fashioned QWERTY keyboard, even when it represents a risky move.<br /> (Photo : PhoneDog/YouTube)

Just before Apple and Samsung conquered the smartphone market, the Canadian company BlackBerry was the most popular phone maker in the world, to the point in which it even outmatched Nokia in this rough competition, thanks to great features at that time, and a QWERTY keyboard that everyone loved. However, since the Cupertino giant launched the first iPhone, the world was shocked because of the touchscreen, and BlackBerry to a downward spiral in which it hasn't been able to escape.

However, the company continues to launch mobile devices, and this year, it is expected to release one or two smartphones that would represent its final shot in the phone business, and so, its highest bet since the moment it released its first product. However, even when it seems a bold move this time, BlackBerry will keep using the QWERTY, which is something that could represent the key to success, and at the same time, the key to the failure.

The first issue about the QWERTY keyboard is the fact that this is a feature that not a single important smartphone brand uses, which clearly creates the danger of being considered as some kind of shameful antiquity that no one -except for BlackBerry lovers- would like to have, given the fact that it resembles a time that is long gone.

Nevertheless, even when this is one of the main risks of the QWERTY keyboard, it could also be the key to achieving success, considering that nothing sells more than originality, and the next BlackBerry could be easily looked as an original product among any other important smartphones in the market, since it wears something that no other mobile device offers.

Naturally, BlackBerry´s marketing team will need to work extra hard in order to sell the next smartphones as something unique and interesting because of the QWERTY keyboard, considering that this feature could be easily criticized be any other smartphone company that feels threatened because of Blackberry´s next mobile device.

Although it might seem a little bit dramatic, wearing the QWERTY keyboard could make BlackBerry some kind of a rebel player that resist the trend waves and keeps its own personality, no matter if the whole world is moving to another direction.

The QWERTY Keyboard Dilemma: The Importance Of The Brand

Believe it or not, BlackBerry still a popular brand in the smartphone market, to the point in which just as Apple and Samsung, it haves its own groups of fans that stay loyal to the brand and buy almost every single product of it. Naturally, the customers´ number is not close to those of the Cupertino company or the South Korean giant, but even in this case, the fact that the Canadian company still have some lovers seems incredible considering that its popularity has decreased a lot in the last years.

As you can see, the QWERTY is not exactly an efficient move, but it could be the key to success if BlackBerry knows how to play its card before the upcoming mobile devices are released, Otherwise, these products will fail, and the company won´t have another opportunity like this in the future.

The new Apple Watch is one of the most expected products that the Cupertino company will release this year, given the fact that this wearable device has been quite successful.

The BlackBerry Press could be last card of the Canadian company in a game that it started to lose since the most important smartphone brands decided to sport its devices with the famous touchscreen.

The Most Incredible Apps You Can Use With The Surface Pen

The Surface Pen is one of the most incredible tools that you can use with the Surface tablet, given the fact that it would facilitate almost every single task you´re making with it.