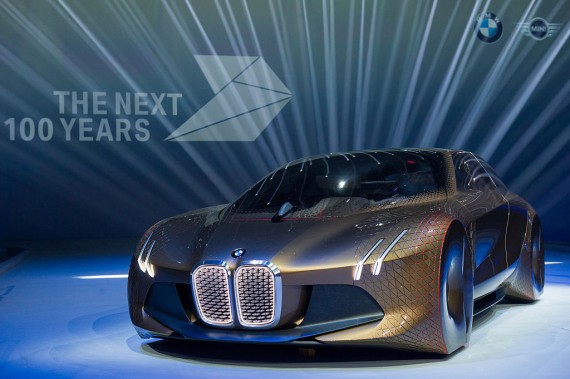 MUNICH, GERMANY - MARCH 07: The concept car 'Vision Next 100' of German automaker BMW is presented during the celebration marking the 100th anniversary of BMW on March 7, 2016 in Munich, Germany. BMW began as a producer of aircraft engines in Germany during World War I, later began producing motorcycles and in 1928 its first automobiles. BMW AG is the parent company of BMW Group, which also owns the car brands Mini and Rolls-Royce. (Photo : Photo by Lennart Preiss/Getty Images)

German car manufacturer, BMW, and Israeli Tech Company, Mobileye recently made a partnership deal to develop fully autonomous vehicles. They have set to bring in at least 40 vehicles to the streets for testing. The goal is to train the vehicles to safely maneuver in the urban jungle without the need of any human intervention.

BMW would be using its 7-series sedans for the testing. BMW's head of development, Klaus Froehlich, aims to apply the data that would be gathered and use it to fully develop the iNext, which would be the successor to the BMW's 7 series. The company plans to develop fully autonomous vehicles within four years.

A Silent Race To Future Technology

Although no announcement has been officially made by any of the car companies, consumers cannot help but notice that different companies, both tech and automotive, are having a silent race as to who will come up with the first fully functional vehicle that is capable of 100 percent autonomy. Companies such as Google Alphabet has already recorded two million self-driving mile range on the road, while Tesla has already 1.3 billion miles with its autopilot system. Startup company Lucid Motors is also developing their own autonomous vehicle, and Faraday Future just launched their first production autonomous vehicle, the FF 91, at the ongoing Consumer Electronics Show.

BMW, trying to get ahead of the race, is trying to convince other car manufacturers to share resources to hasten the development of fully autonomous vehicles and to lower cost. Unfortunately, other car companies are hesitant to adopt BMW's platform and share their resources. Its rival car company, Daimler AG already rejected the offer and stated that they would prefer to use and develop their own technology.

A Partnership Between Companies Is essential To Success

In terms of partnership, Israeli based Tech Company, Mobileye, is critical to the success of the development of fully autonomous vehicles. Mobileye provides and develops resources for the vehicles sensors, camera, radars and lidars. It would be challenging for BMW to move forward without the resources that Mobileye is providing. Mobileye's co-founder, Amnon Shashua, said that finishing and developing the needed technology before the rest is essential as it would be the standard for everyone else. He said that leading the technology is the reason why sharing resources is critical to success.

Intel Joins In To Provide AI

BMW has pledged to develop driving control and dynamics, provide performance engines, and maintain vehicle and occupant safety. Intel Inc. has also joined the partnership and is responsible for providing high-end processors and other computing elements that are necessary to achieve fully autonomous driving. They are also developing a platform for artificial intelligence that would allow the vehicle to seamlessly make decisions and increase road safety.

The next few years truly holds a promise of the future when it comes to road safety and technology. BMW plans to introduce the BMW iNext vehicle by the year 2021. Other manufacturers would also be there once they to the unveiling, and might have vehicles of their own to introduce as well.

Faraday Future has finally unveiled their first ever production electric vehicle. The FF 91 promises supercar performance in a sports utility vehicle package and car reach zero to 60 in less than 2.4 seconds.

Jaguar has been recently put into fire as complaints of vehicle roll away are increasing. The Land Rover, allegedly caused several injuries when it rolled away even after being out in the park position.