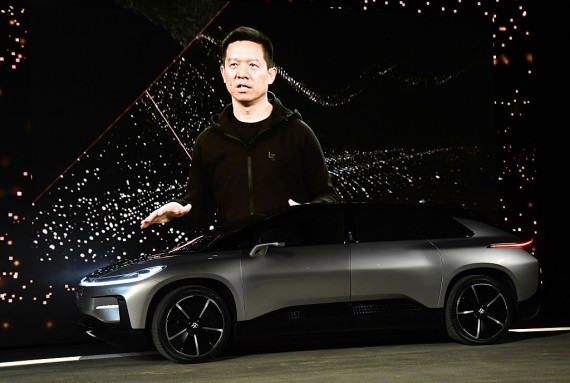 LAS VEGAS, NV - JANUARY 03: A video image of LeEco Founder and CEO YT Jia is shown as he unveils Faraday Future's FF 91 prototype electric crossover vehicle during a press event for CES 2017 at The Pavilions at Las Vegas Market on January 3, 2017 in Las Vegas, Nevada. The 1,050-horsepower FF 91 features autonomous driving with 3D lidar and can go from 0 to 60 mph in 2.39 seconds. CES, the world's largest annual consumer technology trade show, runs from January 5-8 and is expected to feature 3,800 exhibitors showing off their latest products and services to more than 165,000 attendees. (Photo : Photo by Ethan Miller/Getty Images)

Faraday Future is now receiving reservations for its first production car that was just unveiled at the 2017 Consumer Electronics Show. 64,000 individuals have already shown interest in purchasing the FF 91. That number is still far away from Tesla's 400 thousand reservations and may not be enough to say that the startup company can survive the year.

Tesla Was Beat By Just A Fraction Of An Inch

The FF 91, although showed impressive performance during its demonstration at the Consumer electronics Show, has also shown some flaws. The Automated Parking system of the FF 91 failed to engage during its stage demonstration and it was faster than the Tesla by a mere 0.01 second. It might not be a good idea after all to choose a formidable Tesla car as one of its comparisons.

Biggest Backer Is Having Second Thoughts

Faraday Future has also been suffering from the millions of dollars worth of lawsuits from different companies and suppliers. Two major executives have resigned weeks before the unveiling of the FF 91. The Faraday Future Nevada factory that had an estimated production cost of $1 billion dollars also halted its operation.

Faraday Future's biggest backer, Jia Yueting, has earlier expressed that he might not be able to continue funding the startup company is spending too much, too fast.

With the downward trend of Faraday Future, it would be difficult to say that they can stand their ground, at least until the end of 2017. The FF 91 might be the company's ace to survive the fall. However, 64 thousand reservations do not guarantee it. An actual price for the autonomous vehicle is yet to be announced, which means that the thousands who paid can still refund their reservations in case Faraday Future does not give a plausible amount.

Faraday Future is bringing in the more bad news than good over the past year. The 2016 presentation of Faraday Future's Fantasy car, the FFzero1, was not enough to gain people's trust. People can't simply trust a company that has its top executives leaving the company before making a major demonstration. Even Tesla took 14 whole years to even launch a reliable car. It would be wishful thinking for Faraday Future, who is merely three years old, to lead the autonomous vehicle race in just a year.

Having thousands of reservations, a refundable one, could be good for people who want to test the waters first. They have the option to back out and get all their money back, with only time wasted. It would, however, not be good for a startup company who is bold enough to challenge companies such as Tesla, Bentley, and Ferrari. It would be a long shot before Faraday Future, well, gets a bright future of their own.

Bentley has just created a monster machine with the new 2017 Continental Supersports. They have revived the legendary car of the 1920's and made it the fastest four seat production car in the world.

Faraday Future has finally unveiled their first ever production electric vehicle. The FF 91 promises supercar performance in a sports utility vehicle package and car reach zero to 60 in less than 2.4 seconds.

Faraday Future, who has been in major mishaps throughout the year, will have a make or break appearance at todays Consumer Electronics Show. Fans will finally set their eyes on the startups much-awaited production vehicle.