The Vernee Apollo Comes With Its Own VR Headset For Only $300, Is It Worth It? 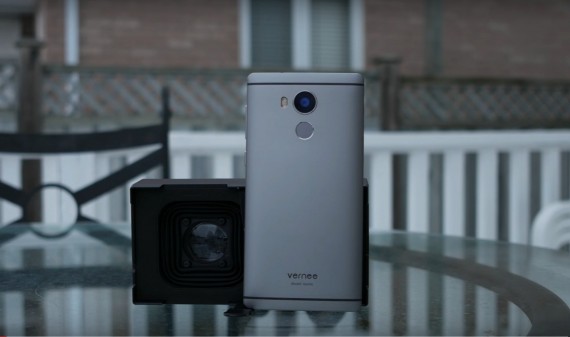 The Vernee Apollo is a Chinese smartphone that comes bundled with its own VR headset for only $300. It has great camera specs and the colors of its screen are good and high in contrast. But is it enough to consider worth buying? (Photo : Zi Reviews Tech/YouTube)

If you are looking for a budget-friendly smartphone with its own VR headset, then the Vernee Apollo is definitely the smartphone for you. Let's discuss its pros and cons and analyze its specs and features.

Looking at the Vernee Apollo's design, one can say it is well-made. Its design is quite similar to the HTC 10. And in terms of size, the Vernee Apollo is a little large for most people, but because of the curves on its back, it makes the phone feel rather small and easy on the hands than it actually is.

For its back design, the Vernee Apollo's camera module sticks out. With camera module designs like this on smartphones, you may find two things that will make it annoying. First, if you lay it down on a flat surface, it will rock left and right as you type. The other problem is that aside from it rocking left and right as you type, its lens is in direct contact on the surface, so it will definitely get scratched.

The Vernee Apollo features a 2560 x 1440 5.5 inch LTPS screen. It is also protected with a gorilla glass as well. And for its performance, colors are said to be good with a pretty high contrast.

The Vernee Apollo runs on Android Marshmallow and is equipped with a Helio X25 chip. It features a 64 GB built-in storage with 4 GB of RAM. This smartphone has no bloatware which is good news for some people, but there is a bit of a downside to that if you find this a problem - it is missing some Google Apps that are usually pre-installed on an Android device. However, it has Google Play so it won't be much of a problem, just a little annoying that you have to install some of the Google Apps yourself.

For the Vernee Apollo, its sound quality is slightly above average. Its audio is slightly crispier compared to other Chinese smartphones. The only downside is that its volume range and bass is only average.

The Vernee Apollo is powered by a 3180 mAh battery and it can be underwhelming considering that it needs to juice a 2k display and the Helio X25 processor. Based on the source, the Vernee Apollo can last for up 4 hours on screen-on time with moderate use. So if you're a heavy user, you might have trouble getting throughout the day without having to charge this smartphone. But if you're a light user, then there shouldn't be any problem.

In terms of camera performance, the Vernee Apollo can never be on-par with high-end smartphones such as the iPhone 7 Plus, Galaxy S7 Edge, and the Google Pixel. However, the Vernee Apollo has one of the best camera performances among Chinese smartphones. It features a 21 MP rear camera that shoots great in daylight and good in lowlight conditions. Its 8 MP front camera also performs well. And for its video, it shoots crispy 4k videos.

The Vernee Apollo package comes in with its own custom-made VR. About the headset, it is made of out plastic and rubber which is not really that bad once you get used to it. Aside from that, there are also several issues that you may find about the VR headset. First, there is no software to calibrate the VR headset. Second, the VR headset is definitely made to fit perfectly with the Vernee Apollo, but it was not custom-made to fit all shapes of heads. And lastly, if you are wearing glasses, you may have a hard time using it, because in some cases, users wearing glasses were only able to see the middle divider and had to press the VR headset so hard against their face.

The Umi Plus E Is The Cheapest Smartphone With 6 GB Of RAM, Is It Worth Buying?

The Umi Plus E is the cheapest smartphone that features 6 GB of RAM for only under $250. It is also the first smartphone to be powered with the Helio P20 chipset.

The 2017 Samsung Galaxy A7 was officially introduced last January 5, 2017 and will be available at the market on January 25th, 2017. It is said to be the premium model of the Samsung Galaxy A series, but is it powerful enough to match the UMI Plus E that features 6 GB of RAM?