The Pipo X10 Is Both A Tablet And A TV Box, Should You Buy It? 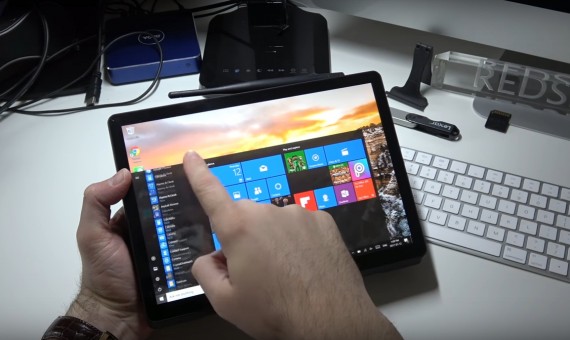 The Pipo X10 is both a tablet and a TV Box. It gives the user the option to choose either running it on Android 5.1 or on Windows 10. It features 64 GB internal storage and 4 GB of RAM. (Photo : Redskull/YouTube)

Do you remember back in the '90s when growing up as a child there was no such thing as a tablet and you wished you had a small television set in your room that you could watch TV all night in secret without the knowledge of your parents or anyone else even if you're going to get in trouble? Well, a YouTube channel did a review on the Pipo X10 and had many things to say about this amazing device. And personally, the design makes me remember the good old days.

The overall design based on the picture is not as light and portable as any normal tablet that we see today. On the right side, you will find the power button, volume controls, two USB ports, and a 3.5 mm headphone jack. And aside from the 3.5 mm headphone jack, the Pipo X10 has two built-in speakers. The first speaker is located on the right and the other is located on the left side.

For its back design, it has this rather large Wifi antenna in which in my opinion looks horrible. But hey, maybe that's good if you're far away from the wireless router. Aside from the Wifi antenna, you will also find a microSD slot, another two USB ports, the HDMI, the network adaptor port, and the power adaptor port.

What's In The Hood?

The video source also checked on what's literally inside the hood and by his surprise, he found something else. Now, I would like to point out that I don't have any proof if this was planted or not, because I am just reporting based on the video and by no means I am supporting his claim or anything whatsoever. The Pipo X10 is reported to feature a 10,000 mAh battery. However, when he opened device, he found a 5,000 mAh battery instead. Perhaps it was a factory defect?

Battery aside, the Pipo X10 also has a fan inside that pretty much runs whenever the screen is on to keep the device from heating up. Another thing about the fan, you can literally hear it when you're in a quiet place.

The Pipo X10 features a 10.8-inch display with a screen resolution of 1080p. The screen has decent sensitivity and is quite bright. According to the video source, when you are using the device inside a room with a lot of lights, you may find that its screen gives a lot of reflection. So it is best to use it in lowlight conditions.

The Pipo X10 runs on both Android 5.1 and Windows 10 which was already mentioned earlier. So when turning on the device, the device will let the user choose on what OS they are more comfortable with. But for the video source, it was focused more on the Windows 10 OS. Another thing about using the device is be sure to install an external hard drive, because the 64 GB internal storage may prove to be insufficient for most people.

Regarding the Windows 10 OS, the Pipo X10 is said to receive constant updates. And if you click on the "Activation" located at the Settings menu, the device will show you that it has an activated license and it actually works. There is also a Windows Store in case you want to add some apps (the Android OS also has Google Play).

For its software, it scored a benchmark test of 615.6 which is actually great for a mini pc. As for gaming experience, the video source played the game Asphalt Xtreme on the Pipo X10 and it did pretty well. The colors were decent and there was no lag or whatsoever.

The Pipo X10 TV Box does have some flaws, especially with its size. But for me, I think it's a great device to reminisce the good old days (not that I'm saying the design is old-fashioned). It's just that everything right now is all about futuristic designs like laptops getting thinner by the year as well as smartphones. What I'm trying to say is that there are times you just want something that reminds you of the yesteryears and think about how life was back then when you were still a child.

The M8S Pro TV Box is a device that enhances TV experience better because it will let you enjoy plenty of HD movies, tv dramas and more videos on demand.

Apple Wants Hollywood Status:Plans To Launch Shows Like 'Westworld' And 'Stranger Things' By The End Of 2017

Apple is planning to launch an original TV show by the end of 2016. It will be available on the Apple Music which will be bundled with Apple's $9.99 per month subscription service.