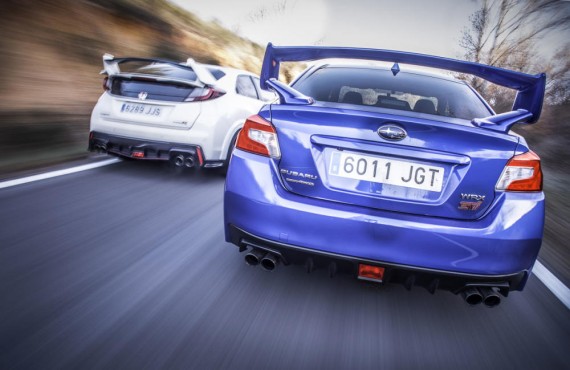 A meeting between 2017 Honda Civic and 2017 Subaru WRX is the perfect scenario for an epic rivalry. Which one will come out on top when these two titans get locked in a duel for supremacy? (Photo : Best tuning cars/YouTube)

When 2017 Honda Civic meets 2017 Subaru WRX, a duel for supremacy takes place. While it is true that the sedan segment is no longer as big as it used as people move towards the more family oriented SUVs, there are still many of us that would love to get behind the wheels of sedans. Honda Civic and Subaru WRX are two of the biggest names in the auto industry that often put people in a dilemma over which one to choose. Of course, only one may reign supreme and the only question is which will it be?

The 2017 Honda Civic is paired with a couple of fair-powered engines. One is a 2.0-liter inline-4 that delivers 158 horsepower and 138 pound-feet of torque that is paired with a six-speed manual transmission with an optional continuously variable transmission (CVT). The higher trims are equipped with a turbocharged engine capable of 174 horsepower and 162 pound-feet of torque. The Honda Civic also offers a performance version in the Type R and it has a 2.0-liter engine that can crank out 305 horsepower.

The 2017 Subaru WRX on the other hand is powered by a 2.0-liter four-cylinder boxer engine that can make 268 horsepower and 258 pound-feet of torque. This is paired with a six-speed manual transmission with an option for CVT that has eight-speed shifting mode and paddle shifters. A more powerful configuration is also offered in the Subaru WRX STI version that is equipped with a 2.5-liter turbocharged engine that can put out 305 horsepower and 290 pound-feet of torque.

Needless to say that no matter which kind of vehicle you are looking to buy, fuel efficiency is one of the factors you take into consideration before you make a decision. The 2017 Honda Civic has an estimated fuel economy rating of 28/40/32 miles per gallon in the city, on the highway and combined. The 2017 Subaru WRX in comparison is not as promising as the Civic. The 2017 Subaru WRX only offers 20 and 27 miles per gallon in the city and on the highway respectively.

Regardless of your cup of tea, the price is certainly among the deciding factor in any purchase decision you make. Reports state that the 2017 Honda Civic has a starting price of $18,740. The 2017 Subaru WRX on the other hand, starts a little higher with a price tag of $26,695.

The 2017 Honda Civic offers more option in terms of powertrain while the 2017 Subaru WRX has a more powerful base engine. In the end, both have the same numbers in their performance variants. And as far as the fuel economy goes, the 2017 Honda Civic is clearly at an advantage and the same is true in the price aspect. However, that does not mean that the 2017 Subaru WRX has already lost. There are still a few aspects that need to be considered and this is merely the first round in this duel for supremacy. And with that being said, a second round is due to take place soon.

When 2017 Honda CR-V meets 2017 Subaru Forester, a crossover duel takes place. Which one will be victorious?

The 2017 Honda Civic Type R is going out with a bang as it bids its farewell in a Black Edition.

Ford Says Ranger Will Make Its Comeback In 2019

Ford has just announced at the 2017 Detroit Auto Show that the Ranger will make a comeback in 2019.

The all-new 2017 Honda Civic Si comes with a turbocharged engine and sleek design with loads of features for a good price under $25,000.00.

This virus is the same one that infected over a million machines worldwide after taking advantage of security holes in some Microsoft products. According to a Honda spokesperson, about 1,000 units were not produced as planned because of the attack.

10th-generation Honda Accord Will Debut On July 14

There will be three transmissions available, a six-speed manual, a CVT, and an all-new Honda-developed 10-speed automatic. It's good to see Honda sticking with a manual as more competitors drop three-pedal setups from their cars.