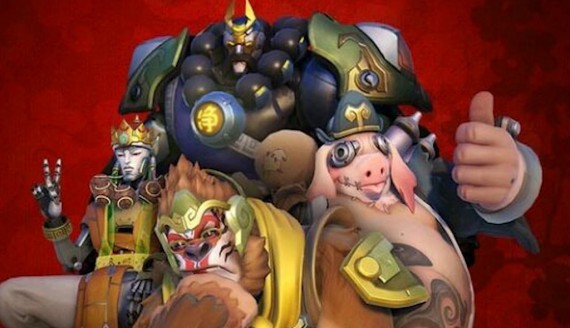 "Overwatch" is holding a Year of the Rooster event soon and new skins for Zenyatta, Reinhardt, Winston, and Roadhog have been possibly leaked through a Chinese ad. <br /> (Photo : Hammeh - Overwatch (FailCraft)/YouTube)

Blizzard Entertainment has promised avid fans and gamers of "Overwatch" another new event to look forward to this year. The developers have recently confirmed that it will be holding the Year of the Rooster event to commemorate another joyous celebration this year. After confirming with news of other characters garbed in new oriental costumes, an ad might have just leaked the new skins for Zenyatta, Winston, Roadhog, and Reinhardt

After fans earnestly voiced out for a new event, Blizzard Entertainment finally confirmed that it will be holding one to celebrate the up and coming Chinese New Year this 2017. The approaching in-game event has been named Year of the Rooster, signifying that this year falls under the Chinese zodiac sign for rooster, which almost embodies the essence of punctuality and fidelity. Blizzard Entertainment though has shut down rumors and even hopes that there would be an in-game event celebrating Valentine's Day despite hints of an "Overwatch" couple being put up.

Anyway, the Year of the Rooster was recently confirmed by Blizzard Entertainment with the release of two new video teasers. These two video teasers featured the ice queen Mei and mobile suit rockstar D.Va donned in Chinese and Korean modernized traditional outfits, depicting that these will be the said characters' new skins for the upcoming event. But it seems like more of these new skins have been leaked thanks to a local Chinese promotional ad.

A Reddit post went viral after it revealed that a Chinese "Overwatch" player has accidentally bumped into a local ad of Gewara advertising the said online video game about a free week-long event in China. The poster features the popular tank and support characters namely Reindhart, Roadhog, Winston, and Zenyatta. The said Chinese poster was in red and promoted the details that read "Journey to the West" Limited Skins, Year of the Rooster Free Trial", which is captioned to run from Jan. 24 to Jan. 31.

So, the big deal here is that the aforementioned four "Overwatch" tank and support characters are all garbed in new outfits, therefore might just mean that these are their new official skins for the upcoming Year of the Rooster event. The four characters are in costumes that portray the characters starring in the popular Chinese novel titled "Journey to the West". Though Blizzard Entertainment has yet to affirm these and players have to actually to see the event to know it's true, it is enough to have everyone excited. Though the trial for the Chinese event will run for a week, it has already been reported the actual "Overwatch" Year of the Rooster event will run longer than that.

(Photo : hythl0day/Reddit) New skins for Zenyatta, Reinhardt, Winston, and Roadhog have been leaked through a Chinese ad.

Zenyatta comes as the main character in "Journey to the West", the monk named Xuanzang, also referred to as Tang Sanzang. Reinhardt's skin is of Sha Wujing's, or popularly known as Sha Heshang, who is one of Tang Sanzang's disciples who became a sand river monster. Winston comes as the famous monkey king named Su Wukong while Roadhog's skin is the reliable pig fighter named Zhu Bajie, another disciple of Tang Sanzang.

Blizzard Entertainment is no stranger when it comes to holding events based on various yearly occasions and even crossovers just to increase the fun in their games. They have already held an event for "Overwatch" to celebrate Halloween and then the recent one called Winter Wonderland event, which was to celebrate last year's yuletide season. Fans always look forward to surprise events because of the new in-game stuff that comes along with it that they can get and test out.

Blizzard Nerfs D.Va Yet Again And ‘Overwatch' Fans Are Not Happy

"Overwatch" players are not happy with the current developments with D.Va along Blizzard's ongoing PTR. Find out what changed again and read on why they had to nerf D.Va.

Some "Overwatch" players are asking to for Widowmaker's hook to be fixed. Meanwhile, Mercy just got nerfed in the recent patch released by Blizzard Entertainment.

‘Overwatch' Guide: Play Like A Boss In New Oasis Map

Here are some tips and tricks to guide "Overwatch" players on how to maximize the new Oasis map and how to get their heroes to use the perks.