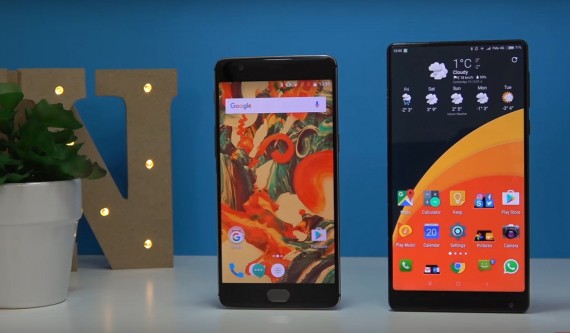 The OnePlus 3T and the Xiaomi Mi Mix are both smartphones that feature a Snapdragon 821 chipset and 6 GB of RAM. But in terms of performance speed, which is faster? (Photo : Redskull/YouTube)

A YouTube channel that goes by the name Redskull did a speed test review between the OnePlus 3T and Xiaomi Mi Mix. Which device do you think won?

The OnePlus 3T features a 5.5-inch Optic AMOLED capacitive touchscreen with a screen resolution of 1080 x 1920 pixels. It runs on Android 7.0 Nougat and is packed with a Snapdragon 821 chipset. Its internal memory is 64 GB with 6 GB of RAM.

On the other hand, the Xiaomi Mi Mix features a 6.4 inch IPS LCD capacitive touchscreen and a 1080 x 2040 screen resolution. Its OS is Android 6.0 Marshmallow and is powered also by a Snapdragon 821 chip. It features a 256 GB built-in storage partnered with 6 GB of RAM.

The first fingerprint scanner speed test conducted was having both smartphones' screen turned off. The fastest for this test was the OnePlus 3T.

Next test was having both smartphones' with its screen turned on. For this test, the Xiaomi Mi Mix was faster.

The first test on the opening app was Fifa 16. For this test, the OnePlus 3T was faster in opening the app, but the Xiaomi Mi Mix started the game first.

The third test is opening Google Chrome. Results revealed that the OnePlus 3T was faster in opening the Google Chrome app.

The fourth test was opening Pokemon Go. Just like the earlier test results, the OnePlus 3T was faster in opening the app, but the Xiaomi Mi Mix was the first to start the game.

The fifth test was opening Twitter. For this test, the OnePlus 3T was faster.

The sixth test is opening the game app, Asphalt Xtreme. For this test, the OnePlus 3T won overall from opening and starting the app first.

The seventh test was opening Instagram. Based on the outcome, both smartphones shared equal result from opening the app and opening pictures.

The eighth test was opening the game app, Temple Run 2. Again, the OnePlus 3T was faster, but the Xiaomi Mi Mix started the game first.

For this part, the video source did a rerun about 4 times, 2 were successful, while the other 2 were not. However, the results showed that the OnePlus 3T was faster.

The Android 7.0 Nougat: If OnePlus Users Have It Right Now

News about the Android 7.0 and OnePlus phones comapatabilities, release date and more.

The Xiaomi Mi Mix is another smartphone released by the well-known Chinese company Xiaomi which is known for producing high-end and innovative smartphone designs on a affordable budget. This smartphone was introduced last October of 2016 and was later released the following month. Though it is highly praised by many tech enthusiasts, it also has its own flaws.