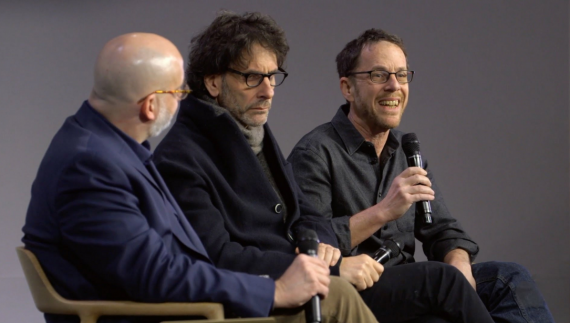 The Coen brothers have directed a Mercedes Benz Super Bowl commercial that is starting to roll in soon. The said ad is made by the Coen brothers for the first time in 15 years. (Photo : Anne Mavity/YouTube )

The Coen Brothers made the films such as Fargo, Raising Arizona, and The Big Lebowski. Now, the three men come together for a very awesome Super Bowl commercial. The Coens wrote and directed the Super Bowl ad for Mercedes-Benz, which is their first output since making a Super Bowl ad for H&R Block in the year 2002.

Mercedes-Benz Super Bowl Commercial Is Directed By The Coen Brothers

All the fans of the Coen Brothers are looking forward to their work for the Super Bowl on February 5. The brothers, Joel and Ethan Coen, have directed a new Super Bowl ad, their first in 15 years. The commercial is a 30-second spot for the Mercedes-AMG brand which is a new point of differentiation from the luxury automaker, according to AdWeek.

"We are now switching from AMG as a proof point for Mercedes-Benz performance to AMG as its own brand," explained Drew Slaven, vice president of marketing for Mercedes-Benz USA. "It's still part of the Mercedes-Benz family—it's called Mercedes-AMG—what we're really beginning to do is put the AMG piece of it front and center." The high-energy commercial is a tribute to the 1969 film Easy Rider; the film's star, Peter Fonda and its famed soundtrack, Steppenwolf's "Born to be Wild."

"[The AMG brand] is known by performance drivers but not as much by a broader community, and that's why we went to the single best way to [introduce it to a broader audience], which is a television commercial in the Super Bowl," Slaven said. "Peter Fonda plays a critical piece of the storyline, and he's known as someone who still epitomizes what it is to love driving performance and the open road" The said ad will debut during the fourth quarter of Super Bowl LI.

Other Super Bowl Commercial You Can Look Forward

Yellow Tail is a well-known brand of wine produced by Casella Family Brands which is based in Yenda, Australia. According to SportsGrid, Yellow Tail is the first Super Bowl ad for wine in 29 years. Yellow Tail got around Anheuser-Busch’s exclusive rights to alcohol advertising in the Big Game by doing this regional ad, which will be seen in 80 percent of the country.

Mr. Clean is coming up on his 60th anniversary next year. Making his debut in 1958, the Procter & Gamble cleaning product that was invented by the owner of a shipping line who needed a non-toxic cleaning product that wouldn’t make his workers sick. Mr. Clean immediately became the top-selling household cleaner on the market. This year Procter & Gamble has introduced a new, sexy Mr. Clean, in its Super Bowl debut.

In addition to that, Skittles will also reveal its new ad in the Super Bowl. Skittles is a brand of fruit-flavoured sweets, currently produced and marketed by the Wrigley Company, a division of Mars, Inc. It checks in with their new ad, and it’s an upgrade from the last year’s bizarre Steven Tyler nightmare-inducer.

TurboTax claims to be the no.1 best-selling tax software. Free Edition includes free IRS efile, which easily prepare your tax return and file income taxes online. TurboTax is back for the fourth consecutive year with a 45-second spot, starring Humpty Dumpty, in the Super Bowl.

Next is Wix, its commercial would like to remind you that it’s easy to make your own stunning website. Although what that has to do with busting up a restaurant is unclear. Another one is Intel. Apparently, Intel thinks that people will watch Tom Brady do anything -- even brush his teeth before eating a pancake off of the floor after taking it away from a dog.

Mercedes Benz Gives Us A Peek At 1000Hp Project One Hypercar

Mercedez Benz confirms that a 1000 horsepower Hypercar called project one is on the way.

2017 Detroit Auto Show: Check Out All The Hot Cars In The Event

2017 North American International Auto Show is coming and here is a guide for you to check all the hot cars in the event.