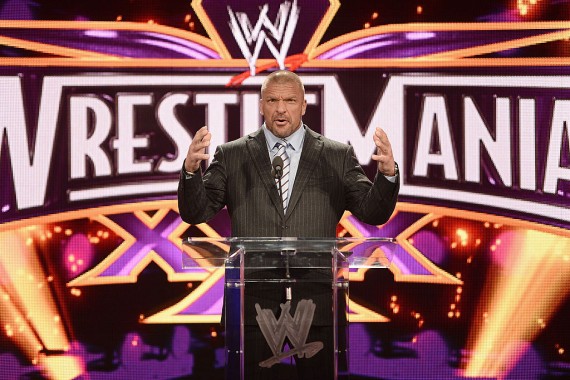 WWE is currently gearing up for the upcoming WrestleMania 33, which is a big event wrestling fans are looking forward to. Amidst the preparations and with some of the popular wrestlers already set to go on WrestleMania 33, WWE recently went on an emergency creative meeting to tackle the alternate plans with Triple H in it. Meanwhile, there are speculations that John Cena will be showing up with Nikki Bella in the said wrestling event.

With Seth Rollins clearly not capable of getting into any wrestling match anytime soon, WWE had to come up with measures to make sure the show goes on. WWE reportedly just went on a creative meeting to discuss alternate plans for WrestleMania just in case Rollins is not fully healed by the time the event takes place. WWE is reportedly planning to put Triple H back in the ring to replace Rollins.

The idea seems good enough since Triple H has been training to compete in WrestleMania. Triple H is planned to go against the ruthless Shane McMahon or even Samoa Joe if Rollins is still not well enough to fight. Rollins, who is in the middle of recuperating his knee injury, is still keen on going against Triple H since he has threatened the latter back in January 2017 that he will take over the show.

Triple H and Seth Rollins’s feud brewed up last year during a championship match that had ended up Kevin Owens to go home with the title. Fans are aware of this feud but with Rollins’s injury, Triple H is one of the bets they want to replace Rollins in WrestleMania 33. Triple H has been in the wrestling entertainment industry for so long, starting his career in 1992, and has then made a name for himself as he rose to fame with big names such Stone Cold Steve Austin, The Rock, The Undertaker, Kane, and much more.

Rollins got his knee injury from a match on RAW against Samoa Joe just last Monday. He reportedly fell awkwardly on his knee as he was being taken down by Samoa Joe. Rollins is currently being treated in Birmingham, Alabama to find out the extent of his injury and he has commented that he wished that this was all a bad dream especially when he is training to qualify for the upcoming CrossFit Games as well.

On the other hand, John Cena will be appearing at WrestleMania 33, which will be held on April 2 in Florida. WWE planned for Cena to go against The Undertaker but it seems like the plans have changed after it was said that a mixed tag team match is being considered for the WrestleMania 33 event. With that said, predictions are John Cena will be teaming up with his girlfriend, Nikki Bella and that they will be matched up against another wrestling couple, most likely The Miz and Maryse.

Critics say that the match-up between the two wrestling couple makes sense and it will be something memorable for the fans. There are rumors as well saying that if the said mixed tag team match pushes through, it will be Nikki Bella’s final match maybe because she plans to retire soon. Others say that Cena is even planning to propose to her on WrestleMania 33.

Floyd Mayweather Jr. is flaunting his wealth over the internet to show what he's made of. Find out what he said about uploading the check.

Conor McGregor shocked the world and the sports industry when it was announced he obtained a boxing license, which then created waves of rumors that his fight with Floyd Mayweather Jr. might just happen.

Paul Heyman has made an appearance at WWE Raw has just issued a challenge against Goldberg to fight Lesnar.