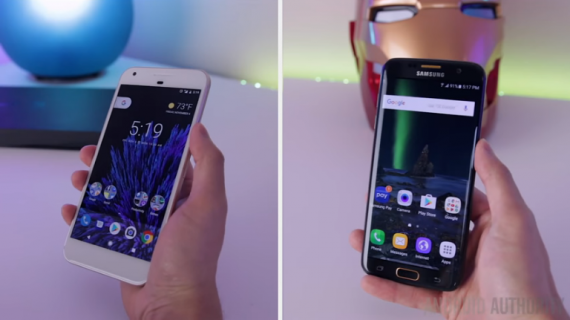 In the Android-powered smartphone world, Google and Samsung took the lead in 2016. But as the Korean company already has a target on its back, it has some larger obstacles to cross for supremacy. (Photo : Android Authority/YouTube)

For years now, Samsung has ruled the Android-powered smartphone industry but was forced last year to welcome a new competitor in the globe. Moreover, the Korean company had to deal with the issues of its Note 7 release, recall, re-release and eventual discontinuation. With this year just beginning, it will take a lot for the company to regain its top spot in the industry.

The Google Pixel, the search engine giant's first 100 percent Google-made handheld was released to the market with rave reviews and positivity. Meanwhile, Samsung had released the Galaxy S7, which was one of 2016's best handhelds. Unfortunately, that profitability train exploded with the Note 7.

This is why there is a lot of pressure on Samsung to release something great this year. The entire world is watching every move in the days leading to the release of the Galaxy S8, the company's first flagship after its international recall and official discontinuation of the Note 7. But according to Tom's Guide, there is one way to beat the odds.

Samsung's upcoming virtual personal assistant, Bixby, will arrive with a feature that allows it to go around the world. With this, the AI is expected to support up to eight different languages when it launches in the Galaxy S8 later this year. English, Korean and Chinese were mentioned in the report, though the other five languages are unclear at this point.

If this proves to be true, Bixby will already have a leg up against the reigning Google Assistant. The incumbent AI only supports a handful of languages, which includes English and German. Despite this, however, it will still trail behind Apple's Siri, which supports up to 20 different languages.

Nevertheless, it will be a much welcome feature that will be appreciated by individuals all across the globe. And Bixby will reportedly debut in the Galaxy S8. The new AI will be easily accessible since a physical button will be placed on side of the phone itself, which will turn it on or off. Users will then be able to request the creation of to-do lists, searching the web or making calls.

But while the new AI will set the Galaxy S8 apart, there is the question as to whether or not it will be enough to take over the popularity of the Google Pixel. Last year, Samsung and Google were the companies to beat in the Android market. No doubt that this year will be an interesting battle as well.

There are more rumors circling about the specs of the S8, as Pocket Lint noted. These include the handheld featuring a Qualcomm Snapdragon 835 processor or an Exynos 8895 chip, a choice that will depend on the region of the purchaser. There has also been talks about 4GB, 6GB and 8GB of RAM options, as well as 64GB and 128GB of internal storage.

Meanwhile, the Google Pixel currently runs on the Qualcomm Snapdragon 821 processor and 4GB of RAM. It sports either 32GB or 128GB of internal storage, but individuals are left with just this as there is no support for a microSD card. It also has 2770 mAh battery. If the rumors prove to be true, the Samsung Galaxy S8 will be a much smarter choice to make for individuals looking to buy the most powerful and high-end Android device in the market - unless Google releases the second generation of its Pixel line.