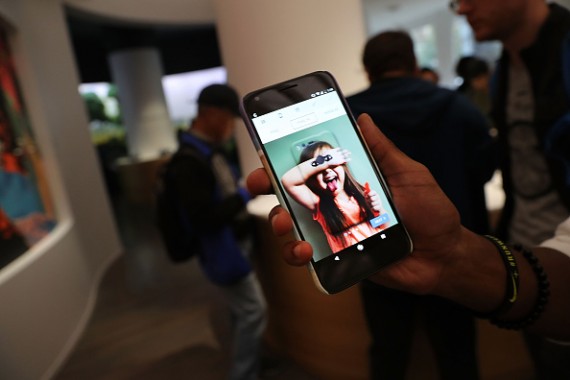 NEW YORK, NY - OCTOBER 20: A new Google Pixel XL phone is displayed at the new Google pop-up shop in the SoHo neighborhood on October 20, 2016 in New York City. The shop lets people try out new Google products such as the Pixel phone, Google Home, and Daydream VR. The products will be available for purchase offsite at Verizon and Best Buy retail stores. (Photo : Spencer Platt/Getty Images)

When Google released the Pixel and Pixel XL handhelds, it was speculated that the search engine giant was finally taking the Android market into its own hands. But despite the rave reviews on each of the devices, it cannot be actually said that the smartphones are reigning the Android market. If the company wants to rule the industry soon, it will need to change a few things in its strategy.

As Forbes has reported, both the Pixel and the Pixel XL have been positively received by critics and users alike. The units' aesthetics are arguably underwhelming, but their performance really is top notch and there are certain features that have put it beyond its competition. This includes being compatible with the company's VR headset, Google Daydream, as well as the very popular camera system.

But, as the publication continued, Google still has not been able to top the Android charts. It was speculated when the company produced 100 percent Google-made handhelds that the end goal was to finally introduce what Android could do and rule the market that runs on its operating system. One reason for this is apparently that there just are not enough stocks to go around.

Despite not being limited edition phones, it has been quite difficult for US residents to get their hands on a unit. And while the company dir restock, some models are less available than others. This in itself is a little odd, because it begs to ask whether or not this was an intentional move from Google. This could mean that the company is strategically stifling stocks or that there are troubles with the supply chain that have not been solved.

Another off-putting strategy that Google took on was to supply the Pixel and Pixel XL exclusively with Verizon. Individuals nowadays would prefer to pay for a handheld on a monthly basis, which most carriers provide. However, having an exclusive partnership with Verizon would force most individuals to pay cash upfront for either unit. This severely limits the potential user base of the smartphones.

Moreover, there are several other possibilities in the market as neither the Pixel nor the Pixel XL is irreplaceable. Its relative infancy in the industry means that there is no loyal following yet and consumers will look to other options. As ZDNet has reported, there are a handful of business phone alternatives available.

The Moto Z Force Droid Edition is one of these alternatives. The handheld runs on Android 7.o Nougat and has Daydream VR support, as well as a shatterproof display and a massive battery. Meanwhile, the LG V20 has a replaceable battery, expandable storage, and a unique modular design. On the other hand, there is also the Huawei Mate 9 which is significantly cheaper, has a larger display and dual rear cameras.

It is, of course, possible that Google never intended to rule the Android market with the Pixel and Pixel Xl and instead opted to appeal to a niche market. Perhaps the company wanted to slowly ease into the industry by releasing just a handful of devices that were sure to be well received. And with rumors circulating about a Pixel 2 device, a Google-run Android market might become a reality.

In the Android-powered smartphone world, Google and Samsung took the lead in 2016. But as the Korean company already has a target on its back, it has some larger obstacles to cross for supremacy.

Android Wear 2.0: The End Of The Smartwatch?

While it was once the item to have, smartwatches are now something most people just glance over. Android Wear 2.0 will try to change that, but will it be enough to save a dying art?