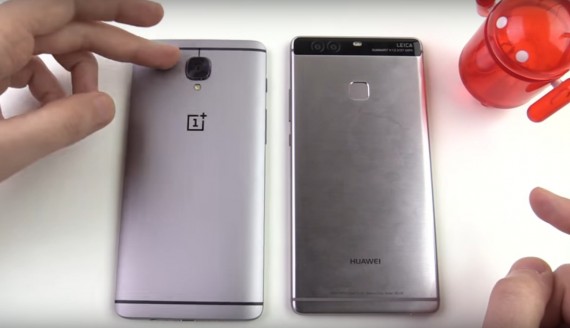 We've been hearing so many rumors about the Huawei P10 and OnePlus 5 lately. Here are all the things you need to know about the two devices. (Photo : AndroidWorld.it/YouTube)

The Huawei P10 and OnePlus 5 are both top-tier and highly anticipated smartphones expected to be released this year. With that being said, what do we know so far about these two powerful devices?

The Huawei P10 is expected to cost at around £410, which roughly translates to $514. As for the OnePlus 5, SamsungGalaxyS8Edge claims that it could be at the price range of $480.

Based on a teaser video released by Huawei, the Huawei P10 is coming with the description text that says, "Barcelona26.02.17 Stay tuned..." As for the OnePlus 5, the only thing known is that it could possibly be released this April.

The Huawei P10 is reported to have a 5.5-inch screen. Regarding other display specs, varying reports claim it could be either Full HD or Quad HD, both having a pixel density of 543ppi.

On the other hand, the OnePlus 5 is expected to have a 5.5-inch optic AMOLED capacitive touchscreen. Aside from that, there is none.

The Huawei P10 is reported to pack a Kirin 960 chip clocked at 2.3GHz. About its OS, there was no mention of it, but reports are assuming that it could possibly be Android Nougat.

The OnePlus 5 is said to run on the latest Android Nougat and be equipped with an unspecified Snapdragon chip along with a 3.2 GHz processor. Aside from that, there is nothing more.

Based on a previous report by Trusted Reviews, the Huawei P10 is said to have either 32 GB or 64 GB of internal memory storage partnered with 6 GB of RAM. It will also have an expandable memory option of up to 256 GB via microSD card.

On the other hand, the OnePlus 5 is said to have an internal memory storage of 64 GB and 128 GB. As for its RAM storage, initial reports were claiming 4 GB. Now, it only just got more confusing, because even though most reports are saying it is 6 GB, there are a few reports suggesting that there could be a possibility that OnePlus could up their game by making it 8 GB of RAM.

But if you ask me, I will stick with 6 GB of RAM. And in regards to whether there is a memory expandability option for this device, rumors are saying it is 126 GB via a microSD card.

As for the OnePlus 5, there are varying reports about what camera MPs will this device have. Some reports claim it is 22 MP and 8 MP, while other reports suggest 16 MP and 12 MP.

Speaking about the 16 and 12 MP report, there is a list of "camera features" for it. It is said to have optical image stabilization, geo tagging, facial recognition, HDR and auto laser focus.

The only thing known about the batter spec of the Huawei P10 is that it could possibly introduce a higher battery capacity compared to the Huawei P9. However, it is better to keep an open mind and expect other possibilities.

The Huawei P10 Plus and the Samsung Galaxy S8 are both premium smartphones that are set to be released this year. Both of them comes with two variants with mind-blowing specs and features worthy to be considered as one of the best flagship phones of 2017.