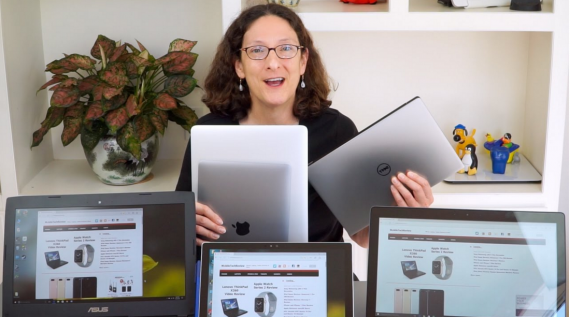 The upcoming Microsoft Surface Pro 5 would remain a benchmark when it comes to 2-in-1 gadgets. But since it's not on the market yet, let us see other 2-in-1 devices that can be its alternative. (Photo : MobileTechReview/YouTube)

The Microsoft Surface tablet PCs have come a long way since their first debut back in 2012. But the concept behind the hybrid device's design remains unchanged: A PC and tablet in one that can be a real 2-in-1 gadget. As time goes by, we can say that both the hardware and the Windows OS of the Microsoft Surface series had to mature. In fact, it finally hit its stride with the Surface Pro 4 in 2015.

The Alternatives For The Microsoft Surface Pro 5

The Microsoft Surface Pro4, the predecessor of the upcoming Surface Pro 5, instantly becomes the ideal that other PC makers want to follow. Such company who also released their own versions of the Microsoft's 2-in-1 device are Lenovo, Samsung, Acer and more. Like the Microsoft Surface, these 2-in-1 devices are Windows 10 tablet PCs with corresponding detachable keyboards and gives the user a more laptop-like experience.

While we are waiting for the Surface Pro 5's arrival this coming spring, there are several alternatives worth checking out. And since many were unveiled after the Microsoft Surface Pro 4, as reported by CNET, you'll find updated features like USB-C ports as well as active pens with greater levels of pressure sensitivity. Check out these devices!

The Miix 510 comes very close to the Microsoft Surface Pro 4 in performance, battery life as well as in features. The more good news here is this Lenovo device costs much less. In terms of the look of the two laptops, it looks so identical but Lenovo includes its keyboard. The Miix 510 got a 12.2-inch 1,920 by 1,200-pixel display compared to the Surface Pro 4's 12.3-inch 2,736 by 1,824-pixel resolution display. The Lenovo Miix 510 lacks on microSD card slot, but it does have a USB-C port instead of Microsoft's proprietary Connect connector.

According to Trusted Reviews, Wacom MobileStudio Pro 16 has a great display and its stylus is considered is best in its class. The express keys of this Wacom device is customizable and its optional RealSense camera is great for 3D work. But one of the con is that its battery life should be slightly better especially compared to other Surface or Studio Pro.

The design, keyboard and performance of the Acer Aspire Switch Alpha 12 are impressive and it runs quietly impressive. For the price of $700, its screen resolution was lower than the Microsoft Surface Pro 4's 4K display but it was still nice to use. The only disappointment with this 2-in1 device is its optional pen but the other features are extravagant.

The pricing of the Samsung Galaxy TabPro S is starts at $700. It is thinner compared to other such hybrid laptop/tablet. Maybe because Samsung wants the user to feel that they are using something more like an iPad. Samsung Galaxy TabPro S boasts great battery life at more than 7 hours of usage and a brilliant AMOLED display that makes it more pleasure to use. What is a little less pleasurable is Galaxy TabPro's slightly underpowered Intel Core M processor but overall, teh value excellent.

Just like the Samsung TabPro S, the Huawei Matebook is designed more like an iPad compared to other Windows 10 tablets. This Huawei product has an excellent screen and really nice-sounding speakers. It has a responsive fingerprint sensor that made logging into Windows a snap. But, unfortunately, its keyboard as well as the pen aren't included, so unless you can find it anywhere at a significantly better price compared to the Samsung pen, you might just as well get that instead of the Notebook.

Android Wear 2.0 is said to be a large change over the last version of Google’s wearable OS and all its feature is implemented to the LG Watch Sport for a testing overview.

Huawei’s Three MateBook Laptops Start At $1,000, Pre-orders In The US Begin Today

Huawei's three new laptops are the MateBook X, a slim ultrabook; the MateBook E, a second try at fixing the problems of the original MateBook design; and the MateBook D, a 15.6-inch laptop designed for mainstream users.

Huawei equipped the MateBook X with a seventh-generation Intel Core i7 chip, 8GB of RAM and a 512GB SSD, which should promise speed performance. The firm also managed to deliver keys with 1.2mm of travel.