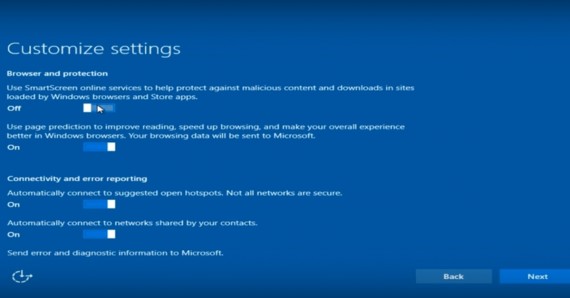 The European Union authorities are concerned about data collection and the default privacy settings of Windows 10. (Photo : MCvideos / YouTube)

Microsoft came under fire for the privacy settings incorporated into Windows 10 during the summer of 2015, shortly after the launch of the operating system. Since then, the company couldn't completely alleviate those concerns, the latest critic of its privacy policies being the European Union (EU).

According to Hot Hardware, the European Union is the latest to show skepticism regarding Microsoft privacy policies in Windows 10. The 28 governing bodies that enforce data protection laws in the EU are reunited in a so called the Article 29 Working Party. The group is complaining about the default privacy settings in Windows 10 that are enabled when a user first installs boots into the operating system.

The Working Party group is also concerned about the customer data collection performed by Microsoft and its subsequently storage on company's servers. In order to increase transparency, Microsoft recently announced some changes to the privacy settings of its operating system. Even taking into consideration the proposed changes to Windows 10, the group remains concerned about the lack of protection of users' personal data.

The new privacy settings are expected to be included this spring by Microsoft in the Windows 10 Creators Update. According to tech analysts, the company decided to add them to appease both anxious OS users as well as the regulators. According to Neowin, those new measures were, in fact, announced after an investigation into Microsoft that began in 2014.

The investigation has been initiated by Swiss data protection regulators. It appears that Microsoft worked with Swiss authorities to introduce those new measures revealed last month. However, elsewhere in Europe, data protection watchdogs consider that the new features don't go far enough.

Before its recent announcements, in 2016, Microsoft has received a letter from the Article 29 Working Party group formed of representatives from data and privacy regulators in each of the European Union's member states. The letter expressed concerns over how the company was informing users of its intentions to collect and store collected private data and how it was collecting that information about them.

In January, Windows Chief Terry Myerson said that the company remains committed on protecting its customers' privacy. Myerson pointed out that the users of Windows 10 operating system have easy-to-use tools and clear choices that provide them control over the way private information is collected and used. He added that trust is important for the company. This is the reason why Microsoft is working to make Windows 10 the most secure operating system ever.

However, it appears that the regulatory bodies within the EU are having a different opinion. France's National Data Protection Commission (CNIL) expressed back in July its own concerns over Windows 10's tendency for collecting excessive customer data. Microsoft responded at the time that it welcomes feedback, but the concerns are unfounded as the company built strong privacy protections into Windows 10.

Now, European authorities raise fresh concerns. According to Neowin, the Article 29 Working Party stated that Microsoft collects data in Windows 10 for advertising and other multiple purposes. The group added that the customers need to know clearly what kinds of personal data are processed and for what purposes. Consent cannot be informed without such information and therefore it cannot be considered valid.

Talking Doll Cayla Is Banned In Germany Over Security Issues

IBM's Watson supercomputer will be used by FDA to secure patient data exchange.