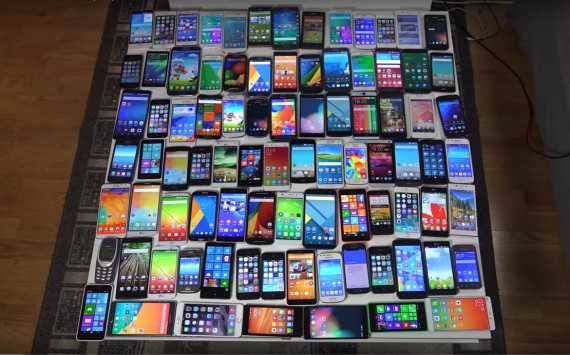 The 2017 Mobile World Congress is coming and in the past few weeks we've been hearing a lot of amazing things. Here is a list of the possible things you can expect at the event. (Photo : adrianisen/YouTube)

In just a few more days, the 2017 Mobile World Congress (MWC) is set to begin. So far, we've been hearing a lot of rumors, leaks and announces about the wonderful and amazing things to be showcased. So, what are those juicy details?

For Samsung, as sad as it may sound, recent rumors suggest that the South Korean tech company will only showcase a glimpse of the Galaxy S8's key features. However, what is really expected at MWC 2017 is the Galaxy Tab S3, which is reported to have an S Pen Stylus, a 9.6-inch screen with 2,048 x 1,536 pixels, Snapdragon 820 chipset, 4 GB of RAM, 12 MP rear camera and a 5 MP front camera. There were also recent leaks (specifically a manual and a photo) suggesting that it will have a keyboard case.

Under the Nokia brand name, recent reports suggest that HMD Global will be introducing the Nokia 8 (aka Nokia P1), Nokia 5, Nokia 3 and a modern version of the Nokia 3310. The Nokia 6, though launched back in January and was China-exclusive, will also likely have a global relaunch alongside the other new Nokia phones as well.

For LG, the long rumored LG G6 is expected to be at the event and come with an amazing rear camera module. According to the reports, its 13 MP dual rear camera will have a 125-degree field of view where one camera is used for taking regular shots and the other for wider shots.

Just today, LG has announced to launch a midrange phone called the LG GX Power 2. The phone itself was designed to offer massive battery life thanks to its 4500 mAh battery and will have its official unveiling at the 2017 MWC.

Expected at the MWC2017 is Blackberry's new phone codenamed as "Mercury." According to reports, it will feature a rectangular touchscreen and the company's iconic QWERTY keyboard, a Full HD 4.5-inch screen, 32 GB with 3 GB of RAM, USB Type-C support and will be powered by a 3,400 mAh battery.

Likely to be unveiled at the said event also are the Moto G5 and Moto G5 Plus. For the Moto G5, it is reported to feature a Full HD 5.2-inch screen, Snapdragon 430 chipset and an internal memory capacity of 32 GB with 2 GB of RAM.

Meanwhile, the G5 Plus is expected to be packed with Qualcomm's Snapdragon 625 chipset and a built in internal memory of 64 GB with 2 GB of RAM. It is also rumored to sport the same biometric sensor touchpad seen on the OnePlus 3.

Huawei has confirmed that the Huawei P10 and Huawei Watch 2 will be unveiled at the upcoming Mobile World Congress. It is also worth mentioning that there are also reports claiming that a Huawei P10 Plus might also join in the party, but without any confirmation from Huawei, it is hard to tell if that rumor holds any truth.

Apparently, Sony is expected to launch the Sony Xperia X2 (aka Sony Xperia X 2017) at MWC. Though the company has been quite skillful in keeping the phone's specs and features under wraps, a leaked image of what could be the Xperia X2's design has been found. Based on the image, it depicts the said smartphone with less bezels, power and volume keys located at the right side and a slight curvature to the display glass. However, if you ask me whether there will be a new Sony phone gracing the event, the chances are slim to none.

As reported, there will be talks about IoT devices that leverage Lower Power Wide Area (LPWA) technologies. There will also be the questioning of the value of all the new data provided by the rollout of IoT technologies where discussions concerning innovative approaches to data usage, data storage, data ownership, data sharing, data lakes and open data that could have a direct impact for the evolution of IoT.

The article then also mentioned about Chatbots and Digital payments. For chatbots, the use of chat apps in content generation, digital media, commerce and customer engagement will be tapped into. In the case of digital payments, providers across the ecosystem will deepen their focus on how digital wallet solutions will enhance consumer purchasing journey, how to leverage customer preference and many more.

A leaked manual of the upcoming Galaxy Tab S3 has been spotted and revealed some details reminiscent of the ill-fated Note 7.

Nokia 8 is all set to receive the first Oreo update among the newly released Nokia handsets this year.

Here is the full list of supported devices for receiving Android 8.0 Oreo update from Motorola.