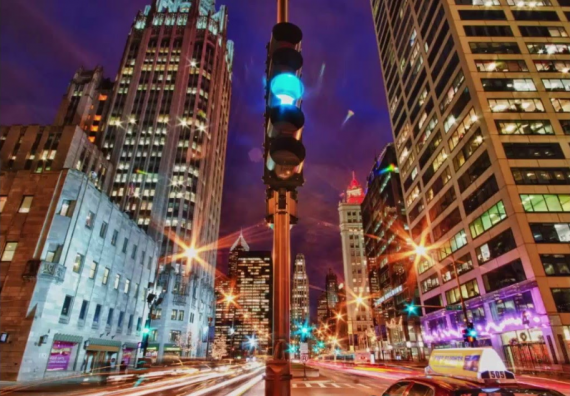 The firms plan to add sensing nodes on top of the light poles to create a futuristic system, which will be programmed to locate gunshots, estimate crowd sizes, check vehicle speeds and more. (Photo : Irukandji/YouTube)

At Mobile World Congress in Barcelona, AT&T announced on Monday two moves to accelerate worldwide smart city development as well as strengthen its position as one of the major contributors in the urban Internet of Things (IoT) marketplace. AT&T said that it will be partnering with Current, which is powered by GE. It will be possible by using GE's Predix-powered IoT platform for LED lights as part of the overall digital foundation in a city.

Aside from that, AT&T is also collaborating with IDA Ireland and the Dublin City Council in Ireland for its first international expansion to foster IoT best practices for smart cities. IDA Ireland is the only agency in the country that is responsible for the attraction and development of foreign direct investment in Ireland. It was founded in 1949 under the name Industrial Development Authority and placed on a legal footing after a year.

"Intelligent lighting plays a huge role in a smart city," said Chris Penrose, AT&T president of IoT solutions. The new independent arrangement with Current extends AT&T's smart city worldwide services and opens new income opportunities for the company. The relationship of the two firms will continue the work as they have already been collaborating together in San Diego as well as in Atlanta, where street lights are being connected using a digital infrastructure.

According to TechRepublic, there are 14,000 new LED lights in San Diego, which are equipped with 3,200 sensor nodes being installed. The project is soon to save the city a total of $2.4 million in its annual energy costs. While in Atlanta, there is a total of 1,000 LED lights being tested in five different areas throughout the city. Mike Zeto, the general manager of Smart Cities IoT Solutions for AT&T, said they have been working with different cities across the US since the last year.

Some of AT&T's ecosystem alliance members such as Cisco and Intel have a good presence in the Dublin area where they are choosing to work. As of today, there is an ongoing IoT project in the Dublin's Docklands that has a main focus on different types of connectivity as well as security solutions around IoT. The next phase of the project will include applications and solutions powered by the firm. The key to the Dublin project will be open source and innovation as the government opens its data to be used by entrepreneurs.

According to DailyMail, the firms have unveiled plans to install cameras, microphones as well as sensors to more than 3,000 street lights. All connections will be added to the top of every light poles to create the futuristic system, which is said to be programmed to locate accidents related things. These occurrences include gunshots, estimate crowd sizes, check vehicle speeds and much more. The system is included in a $30 million GE LED lighting upgrade to 14,000 of San Diego's street lights.

"San Diego is a very early adopter. While it's a smallish deal in dollars it's the biggest deal of this kind yet," Zeto said. The partnership with Ireland will start with monthly meetings and an official application of the project will start in May. Smart cities are no longer the loop of the future. They are now considered as a very important growing thing as quickly as the IoT and give impacts to municipal services around the globe.

Company President Rajeev Suri announced that Nokia would partner with Verizon and Intel to deploy 5G-enabled “next-generation video and entertainment services.” It’s set to launch in Dallas later this year.

The LG G6 is a much more conservative design than its predecessor, taking the form of a sealed unit that drops the removable battery, replacing it with a larger-capacity power pack and waterproof shell.

The more apples you eat, the longer the snake will be. However, unavoidably, you are going to either bump into one of the walls or your snake's own body.

Apple has been granted an application for an experimental license by the FCC to test the new 5G wireless technology.