Star Wars Squadrons review is officially here, and this is what gaming journalists have to say about EA's newest campaign in the Star Wars universe.

After several uneasy years for the franchise, Star Wars Squadrons returns to deliver a little bit of hope for the fans. Set after the timeline of 1983's Return of Jedi, Squadrons centers the story of two pilots from the New Republic's Vanguard Squadrons and the Empire's Titan Squadrons.

Currently, Star Wars Squadrons is sitting with 82 Metascores, which isn't bad after a lackluster reception of Star Wars: Battlefront II.

Mike Hume of The Washington Post crowned the game as "the starfighter sim I've been looking for."

For any player who's a fan of starfighter sims, socializing with the squad or the Star Wars universe for that matter, the game is worth chopping. However, the writer also criticized EA for the game's lack of DLC plan & live service.

According to Alex Castro of The Verge, Star Wars: Squadrons is what the franchise needs to restore what lacked from Battlefront II.

A wholly-revamped mechanism gives Squadrons players a brand-new experience. Whether it's the New Republic and the Galactic Empire, each faction brings a unique skill set on the table.

However, the writer questions whether the game has massive replay value due to EA's odd decision not to release a DLC or any extension pack. 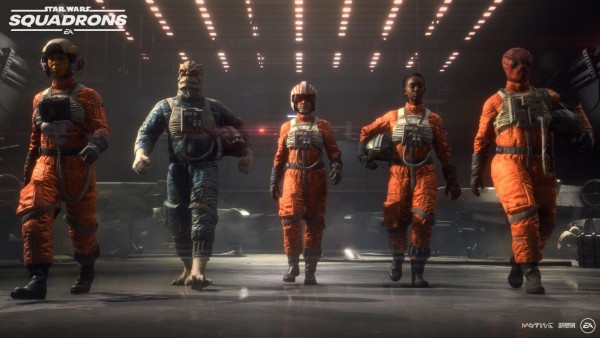 (Photo : EA)
Star Wars Squadrons review is officially here, and this is what gaming journalists have to say about EA's newest campaign in the Star Wars universe.

Road to VR writer Scott Hayden gave Star Wars: Squadrons a whopping nine scores out of ten. Squadrons on VR is a fantastic experience with a plethora of visual polish and top-notch acting. Multiplayer mode has evolved better than ever. Plus, it now lets you cross-platform against anyone from any system.

However, Hayden complains about the game's lack of motion controller supports and constant frame-drops.

READ: Call of Duty Black Ops Cold War: Everything We Know So Far.

Tom Marks of IGN gave Squadrons 8 out of 10 solely for its seven-hour run of the single-player story campaign. Marks believes Squadrons has a solid & entertaining storyline. Especially with VR and a HOTAS joystick, the game gives you an unforgettable experience.

However, the multiplayer mode made a lower score slightly: 7 out of 10.

3.5 stars out of 5 are what Ben Tyrer of GamesRadar+ gave for Star Wars: Squadrons. The writer criticizes the game's missions, calling it 'almost feels like a large-scale tutorial.'

There are still a couple of positive notes from Squadrons. According to the writer, the game is best played using VR to provide a genuinely magical moment. Strategies in the multiplayer mode are a lot deeper than ever, and they let players maneuver whatever they want. Unlike the previous game, grinding feels more rewarding.

Star Wars: Squadrons is available on PS4, Xbox One, and Windows. A version of PS5 & Xbox Series X/S next-gen consoles will arrive upon its availability.

READ: The Last of Us Part 2 Guide: 5 Deadly Tactics to Help You Effectively Kill the Infected.