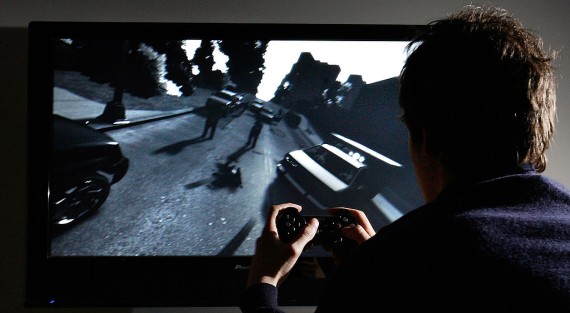 With the PlayStation 4 Pro, a 4K TV is not really a requirement. Sony’s new console will do to provide gamers a new gameplay experience set in 4K quality. (Photo : Photo by Cate Gillon/Getty Images)

The Sony PlayStation 4 Pro might be more expensive and may seem like not a worthy investment for some. But given the revelations provided by Sony's lead and system architect, Mark Cerny, the nitty-gritty details of the upcoming PS4 Pro is well worth the wait. With the PlayStation 4 Pro, having a 4K TV is not on strict requirement but Sony's new console does bring gaming to the next level of a 4K experience.

A New Experience For Gamers

The new Sony PlayStation 4 Pro will not be here until next month, which is just a couple of weeks away. Even with updates and reveals, there are still plenty of things that we do not know about the PS4 Pro. All we know and hope at the moment is that Sony's new console will provide gamers with a new level of gaming experience. But the time of ignorance is about to end, thanks to Sony's lead PlayStation architect Mark Cerny revealing everything he knows about the Sony PlayStation 4 Pro.

Not all gamers are positive about the upcoming PlayStation 4 Pro given that it has no exclusive games to offer. Instead, it will simply use the existing game library of the PlayStation 4, which is why some gamers are skeptical about making the upgrade. But having Mark Cerny reveal so much about the upcoming PS4 Pro shed some light and revelation. It also helped assuage fears of why gamers should make the switch and upgrade their PS4 to Pro. As a veteran in the game industry and with plenty of hardware experience, taking Cerny's word is the key to unlocking the "mysteries" that still surrounds the new PlayStation 4 Pro.

Here are the things we now know thanks to Cerny:

The PlayStation Pro Is More Powerful Compared To PS4

The PS4 Pro is also three times better when it comes to performance with 4.2 teraflops to offer compared to PS4's 1.8 teraflops. The addition of an extra 1GB of RAM also gave the PS4 Pro a performance boost by making app and game switching quick and easy. In quick figures, the PS4 Pro's CPU is faster by 31 percent.

Native 4K Is Not Possible For All Games

While Sony promised a 4K gaming experience with the PlayStation 4 Pro, Cerny revealed that the new console cannot render all games in native 4K. But he assures that the results will be "extremely close to 4K." The PS4 Pro is able to do this using a checkerboard rendering technique, which is quite crafty and a shortcut on how to render visuals in HDR and a near-4K resolution. Games running in upscaled 1080p resolutions only mean that their visuals will be a toned down 4K version. In short, the PS4 Pro will make games look like they are running on 4K television.

The very reason why Sony has to add an "old GPU" and a mirror of it, which is an upgraded version of the old one, is to let PS4 players still enjoy the same titles in the PS4 Pro. By having the old GPU, gamers can still enjoy PS4's existing library of games and support the game and render in with better graphics. Sony's secret? They made the PS4 Pro in a way that the second GPU will just turn off if it uses the old one to run the PS4 games. To remedy this, some developers provided 4K patches to boost performance and graphics of PS4 games.

The PS4 Pro Will Stick With the Dualshock 4

Sony wireless controller, the Dualshock 4, will remain with the PlayStation Pro. Cerny pointed out that it is not in the company's interest to sell expensive gamepads or hastily add enhancements to their existing controllers. What they did is just make a slightly different model for the PS4 Pro's Dualshock 4 controller.

Making the PS4 Pro without a 4K Blu-Ray player is quite controversial for Sony. The Xbox One S can play Blu-Ray discs but Cerny points out - again - that streaming is the next big thing of the future. Basically, 4K streaming is more natural and having a Blu-Ray player might not be a very good move, especially in the future. No more elaboration was made as to the other benefits of removing the disc functionality in the PS4 Pro.

As a new console, we are all curious whether there will be exclusive games for the PS4 Pro. Cerny bluntly answered that they do not want to split the user base and that doing so is their highest priority at the moment. Cerny remarked that maybe in the future, PS4 Pro-exclusive games might come out of the market but not right now. They want to avoid titles that can be played on the PS4 Pro and not on the PS4 and vice versa.

Cerny remained mum whether Sony will offer PS4 Pro consoles with a 2TB capacity. Right now, the PS4 Pro already has a large hard drive with 1TB of storage available. It can also be replaced with faster solid-state drives since the PlayStation 4 Pro is made with SATA III. Cerny just added that Pro-ready games and standard PS4 games will not have that much difference in file sizes. So we concluded that yeah, a 2TB variant may not be in the works - now or in the future.

Gamers may seem disappointed that Sony's PlayStation 4 Pro cannot play all games at 4K resolution as they have promised. But with the PS4 Pro's unique technique and HDR rendering, the graphics looks very much like they are actually played in 4K resolution that you cannot tell the difference. Playing PS4 games on the PS4 Pro instantly gives those backward titles an instant "make-up." So if better gameplay and visuals are all you are looking for, then waiting for the PS4 Pro to upgrade from using a PS4 would be worth it.

PS4 Pro Update: Sony’s New Console Has An Extra 1GB Of RAM And More To Sweeten The $400 Deal

Before its launch this November, Sony has added another extra to their upcoming PlayStation 4 Pro to sweeten its $400 price tag: a memory upgrade worth 1GB of RAM.

Sony Might Consider Its Own Mobile Gaming Ambitions, Thanks To Pokemon GO

Thanks to Pokemon GO, Sony will pursue its own mobile gaming aspirations by releasing five new mobile games to rival Niantic. Will Sony be able to stir up the same phenomenon for their upcoming mobile games just like Pokemon GO had?

The KFC Console: Is it More Than Just a Marketing Stunt? Know the Specs

Is the new KFC Console nothing more than a gimmick to get more people to buy their finger licking good fried chicken? Or is it the birth of a new competitor in the world of gaming consoles?

Stranded Deep: How to Watch Out for Poison and Other Survival Techniques

If you've tried out the game Stranded Deep or are thinking of trying it out, you may want to prepare yourself for poison.