The Dangers Of Cyber Security In Smart Cars 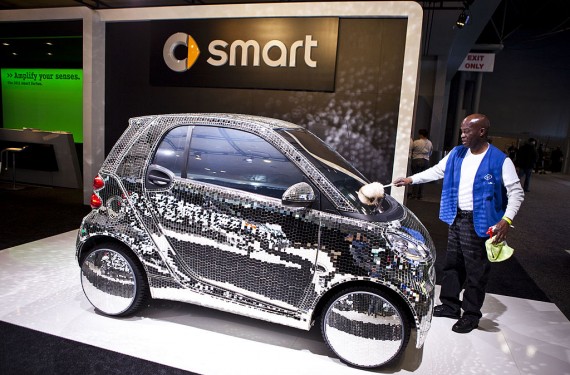 Autonomous cars, or Smart cars, are vehicles that have the ability to drive itself with very minimal or no human intervention at all. What threats can we expect and how safe are smart cars? (Photo : Photo by Ramin Talaie/Getty Images)

An autonomous car is an automobile that has the ability to drive itself with the use of sensors and computers. These cars have already been roaming the streets for years and mostly powered by a battery cell and electrically charged.

Earlier models of smart cars used to be heavy, not reliable enough due to long charging times and high power consumption, and used to be slow on the road. Nowadays, these cars are getting better as charging times are becoming shorter, power consumption goes lower which, in turn, transmits to better economy. Some smart cars like the Tesla Model S can even outperform known sports cars.

Unlike conventional cars that rely on the driver to decide on how the ride will react to different conditions, smart cars can rely on its internal computers and sensors to decide and act on what to do in various situations. The drivers can just communicate to the cars computer where their destination will be, and sit back, relax, and just let the car do its own driving.

Smart cars have sensors that allow it to act safely and avoid road hazards or accidents. The car can also decide on the best route possible using its GPS and onboard computers. However, consumers are not yet giving their 100 percent confidence to the cars' computer, with the reason being that is still "just" a computer, and computers can get hacked.

A hacked smart cars computer can be as dangerous as it can be. Hackers can easily gather data on the drivers' habits, places that are often visited, common routes, home and office address. Hackers can take advantage of this data and use it as an opportunity to do various crimes against the car owner.

Other than having a computer, the cars are also connected to the Internet. The driver can also integrate his smartphone to the computer, basically giving free access to the car's onboard computer, and possibly to hackers as well.

Important information such as phone numbers, text messages, or even credit card numbers can be acquired. A smart car being hacked can also be fatal since this also opens up possibilities of outside car control, meaning, someone from an outside source, the hacker, can take control of the cars steering and driving destinations. A hacker can also disable safety systems remotely and can disable the brakes, or provide wrong information to the sensors.

Last year, a couple of hackers, experimented on disabling a cars transmission remotely, and was successful in doing so. The hackers successfully took control of a jeep Cherokee remotely, although the hacking was done for research purposes, the act opened up a lot of possibilities in the computer hacking world, and also showed that the feat can definitely be done.

With this concerns, the U.S. Department of Transportations National Highway Traffic Safety Administration (NHTSA) issued a recommendations report to prevent cyber security in smart cars. The NHTSA discussed that automakers should make the security and protection of the computer systems from hackers the top priority.

Some recommendations include, but not limited to, limiting the ability to modify the firmware. Being able to modify the firmware means that the hacker can change the computer codes and therefore change or control how the vehicle acts. Control Wireless Access - or the ability to control over a vehicles connection to a cellular wireless network. Users that can connect to any wireless network may be most vulnerable to cyber attacks.

A previous announcement made by Tesla CEO Elon Musk states that the much-awaited Tesla Model 3 would be delivered by late 2017. However, a more recent update says the release is not until 2018. Should you wait?

Will Muscle Cars Die Out With Emergence Of Performance EVs?

Muscle cars have always been part of the American dream. With soaring petrol prices and the emergence of hybrid technology, will the muscle finally switch to electricity for power?

Jaguar has been recently put into fire as complaints of vehicle roll away are increasing. The Land Rover, allegedly caused several injuries when it rolled away even after being out in the park position.

2016 has truly been a wonderful and promising year for both consumers and the automotive industry. New technologies that improve fuel economy and safety have started a trend that will continue to move forward.

Google Home Will Soon Let You Talk To Mercedes, The Car

Mercedes-Benz and Google are teaming up to develop a smart car that will let it talk to the owner through Google Home.