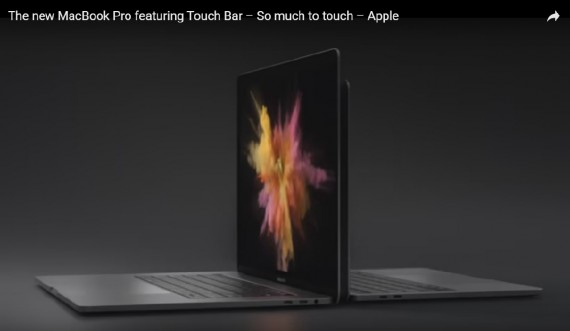 Apple's new MacBook Pro has been officially released and it might very well be dubbed as the King of Laptops this 2016. (Photo : Apple/YouTube)

With the MacBook Pro, it is 67 percent brighter, 67 percent higher contrast ratio, and has 25 percent more color compared to its predecessor. While the HP Spectre x360 houses a gorgeous 13-inch 1080p IPS display which may seem relatively low-res in this age of 1440p and even 4K displays.

The feature lets the hardware owners be able to authenticate and verify themselves with biometrics via an integrated Touch ID sensor built right into the power button that resides to the right side of the Touch Bar.

This new feature is unlike any other among today's laptops. Only the MacBook Pro is sporting this feature. This feature lets you do anything from editing photos, answering calls, scrub videos, answering emails and many more.

One of the many cool things of this feature is the DJ Pro software. It allows you to play digital music easily with just using the Touch Bar.

The MacBook Pro is sporting the new butterfly system that really is also impressive. The HP Spectre x360 sports a 1.3 mm keyboard that is smaller compared to its predecessor which sports 1.5mm.

In the MacBook Pro, the touch pad is two times larger than its predecessor. The HP Spectre x360's touchpad is 5.5 x 2.5 inches.

The MacBook Pro features sixth generation Intel CPUs, with 2133MHz memory and an AMD Radeon Pro GPU with up to 4 GB VRAM. The HP Spectre x360 is driven by Intel's 7th generation Kaby Lake processors. There are Core i5 and i7 models available, 8 to 16 GB of RAM, and 256 GB to 1 TB of fast PCIe SSD storage.

MacBook Pro can last 10-hours of continuous operation, based on full charge and under optimum operating conditions. HP Spectre x360 can last 15.7 hours.

How Will The 2016 MacBook Pro Take The Crown?

Based on the specs, MacBook pro offers more applications and cutting edge features never to be seen, especially with the Touch Bar and Touch ID. But with CPUs, the HP Spectre x360 is ahead.

What's Next For HP's Spectre Line?

There isn't any official confirmation or any solid information regarding this. But based on the specs and features of the HP Spectre X360, they might need to revolutionize it and bring in more unique features that can only be found with the Spectre line.

Right now, MacBook Pro is considered to be the King, but critics are saying there is still a chance for the HP Spectre X360 to take it, because with new projects, the public has yet to decide if there are no performance issues with the MacBook Pro.

2016 MacBook Pro: Everything You Need To Know About Apple's New Power Laptop

Fans have been anticipating for the release of the New MacBook Pro. We discuss the much-anticipated specs of Apple’s most powerful laptop.