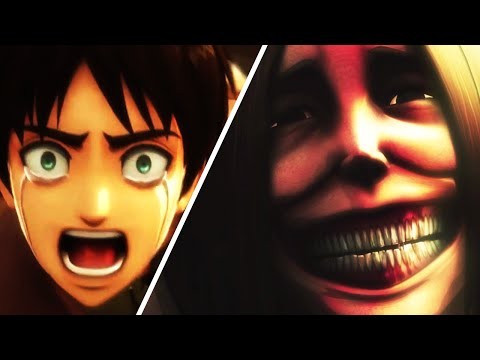 "Attack On Titan" Chapter 87 is arriving really soon. Here are the latest spoilers and updates about the manga series. (Photo : CommunityGame/Youtube)

Spoilers for the upcoming "Attack on Titan" chapter 87 has surfaced online and fans are more than excited to know where the story will lead to. This article will contain a recap of chapter 86 and some spoilers for chapter 87. If you have not read the previous chapter yet, proceed with caution. Otherwise, check out the spoilers below.

This is probably one of the most exciting chapters that were released by the manga series. It answered all the questions from chapter 85. Well, almost all. The chapter kicks off with Grisha telling Faye that they should follow the airship that flew over their heads while they were walking around town. They soon found themselves in a forbidden location and Faye was reluctant to go with her brother any further.

However, Grisha pressured and she reluctantly agreed. Soon after, the two siblings were seen by the guards and quickly approached them. Grisha tried her best to explain to them that it was just a mistake but Faye was taken away and Grisha was beaten up.

When he got home, he told his parents about what happened. Grisha and his father looked for Faye and they eventually found her. Unfortunately, she was already a dead corpse washed ashore in the river.

His father explained the truth about their race including the origin of the titans, and learning about it has triggered something in Grisha. He later joined a group that plans to overthrow the government where he met his future wife Dina and had a son together. Their son was trained to be part of a secret project to infiltrate the government and when it was time for him to do so, his son notified the authorities. It was revealed in the chapter that his son is actually Zeke.

The upcoming chapter is titled "Borderline." The title is speculated to be because of the Mare race being strictly forbidden from going into Paridis Island. There is a part in the Paradis Island where the Mares kill the Elodian traitors.

Their preferred method of killing by inserting a needle on the traitor's nape and pumping a titan serum which ultimately kills them. They will then throw the body over the other side of the wall. It is rumored that this is the reason why there are many titans on the South of the Wall.

The same report also suggests that Dina Fritz has turned into the Smiling Titan who ate Carla Yaeger, the second wife of Dr. Yaeger. If that is the case, Eren might have already avenged her mother's death when eh tapped the power of the Coordinate.

Another spoiler that had surfaced is that Grisha will be tortured by the Elodian soldiers for wanting to overthrow them. It was also mentioned that the titans from the south of the wall actually eat humans.

Another fan speculation is that the manga series is ending soon due to author Hajime Isayama previously telling that he needed less than two years to conclude the whole story. Luckily he has not said anything about it again.

"Attack On Titan" Chapter 87 will be released on November 09 in the December issue of Bessatu Shonen.

5 Best Anime Sidekicks Who Are Sometimes Better Than The Hero

No hero is a hero unless they have their trusty sidekick with them. Here are five sidekicks that are sometimes even better than the hero.

‘Attack On Titan’ Chapter 87 Spoilers: Eren Is The 9th Titan; Fritz And Reiss Family The Same?

After the release of "Attack On Titan" chapter 86, fans are eager to know more about the revelations that were dropped in the previous chapter.

‘Attack On Titan’ Chapter 86: Origin Of The Titans, Link Between Grisha, Eren, And Zeke Revealed

"Attack On Titan" has revealed the origin of the Titans and the revelation of the relationship between Grisha and Zeke shocked a lot of fans.