How Blizzard Plans To Conquer eSports Through Overwatch 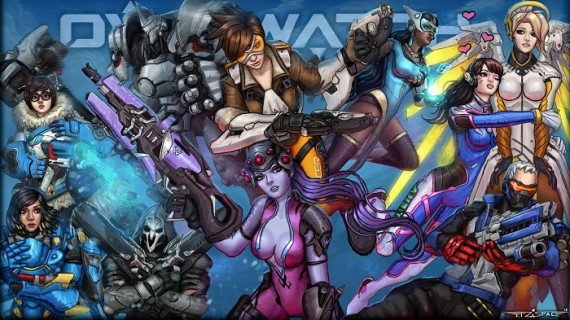 Overwatch Ultimate Guide: How To Master Each Of The Heroes? (Photo : cut1ed3dsh0t/YouTube)

In just a couple of months after its official release, Overwatch has acquired a great number of player pool in the market. The game continues to be a hit even surpassing other well-known first-person shooter games of today. Now, Blizzard is starting to cement its reputation in the world of eSports. Well, actually, it already commenced, and by far, the reception is quite good. But of course, it's only a matter of time before one can say if the studio is successful in doing so.

It's no secret that the video game company has since deemed Overwatch as an eSport title. After all, that's the road that most first-person shooter games take. According to iDigital Times, the first ever OW World Cup -- which took place at BlizzCon this year -- was viewed by more or less 100,000 people. And out of these figures, a total of 3.1 million votes were placed. Let alone the fact that the game already has 20 million players on its resume. From whatever perspective you'll look it, the title is definitely raking a huge following.

Although the aforementioned Overwatch tournament was highly celebrated, it wasn't really the first one to be introduced. It's worth noting that Blizzard has already started funding other eSports constests in the past, only that the BlizzCon one was more successful and publicized. There's no doubt that the studio still needs more improvements, and the devs can certainly agree to that. At least, the announcement about an upcoming OW League which they did during the aforesaid event is one of the few steps to reaching the goal. Regardless, what makes the game a phenom in the scene?

Overwatch Is A Gem In eSports

Almost all Overwatch players will agree that the game is quite easy to learn and understand, though it'll take a good amount of time to master it. Anyway, truth is, these are the factors that make OW a fun to watch and play. Hell these are even the primary reasons why the title is such an achievement in the market today.

Since Overwatch is the kind of game that can be understood by a layman, any player -- be it a pro in MOBAs or MMOs -- can relate to it right away. And because of this, more and more players are starting to join the celebration. It's a complete package really, as it affects both the amateur and professional players in the scene.

The Package Loadout System Of Overwatch

By Package Loadout System, it refers to the Overwatch hero roster as a whole. And by that, it includes the characters' capability of changing abilities and even weapons. Take note that no matter how players frequently play them or not, the heroes still offer the same types of weapons and/or abilities. This alone is the main reason why OW is a game that's easy to learn. For instance, a player can learn Genji in just a matter of 5 or more games. After that, the cyborg ninja can readily be his main. But of course, it doesn't mean the player is already a pro at it. It simply means that Blizzard wants people to play a game that won't require a manual of sort in order to be understood.

The Team Construction Of Overwatch

If League of Legends is more about team construction during the early part of the game, Overwatch is way better. Why? That's because the process never ends. It's the kind of game that lets players adapt to the current situation. If he's about to be rekt, he's got to move way. If he's about to kill, he might need the help of his team. Above all of these, each hero is balanced in a way that every single one of them has their own counterpart. Won't believe? Take for example Lucio's ultimate, the Sound Barrier. As awesome as it sounds (pun not intended), it can easily be pacified by Sombra's EMP. Sure, the latter hero has just arrived, but it's good to know that the studio is indeed living to its standards.

TL;DR Blizzard is prepping Overwatch to be the most unique and succesful game in eSports. And by its uniqueness -- one that most first-person shooter games of today don't offer -- it can easily captivate the hearts of players and viewers.

What are your thoughts on Overwatch as well as its popularity in eSports? Do you also agree that the game can be a successful one in the scene? Tell us what you think at the comment section below!

This Guy Played Overwatch In A Whole New Level

Are you in for a cooking show topped with some cool Overwatch play? If so, better check this out!

Been wondering how to get your hands on the Oni Genji Skin in Overwatch? Well, check this guide out!

Here Are 4 Reasons Why Overwatch Is Just So Popular

Have you considered playing Overwatch already? If not, you need to read this -- now!