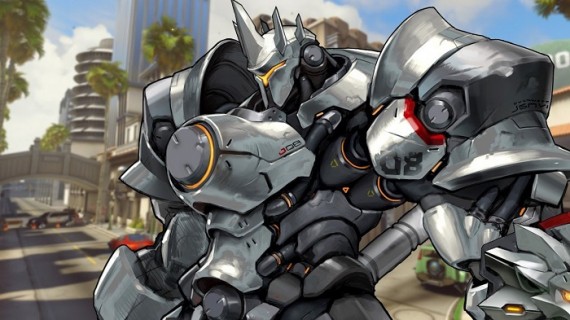 Overwatch currently has a total of 5 heroes in the tank department. (Photo : IGN/YouTube)

Getting good in Overwatch isn't a difficult goal to achieve. But of course, it means practice and more, well, practice. You need to be familiar with each hero, both on attacking and defending. If you want to give your team a good upper hand in the game, you need to know how to play tank the right way. This guide will give you insights on the best tanky heroes in Blizzard's title. Apart from that, you'll know exactly how to, you know, "git gud."

Winston is definitely the first in this list. In his most organic form, he's a utility tank that a team must have. But remember: this hero isn't all about being aggressive. Or, you know, the kind of play where you want to just go inside and expect the healer to come for your aid. No. This peanut butter junkie is all about getting a good position. You need to know exactly where the right spot to land is when using his Jump Pack. You need to know how to have a good grip at using his Energy Barrier. And, most importantly, you need to know when exactly to put him on rage. Besides, he isn't that hard to aim (as he don't need one). As long as you have the right timing and positioning -- let's add patience, yes -- there's absolutely a bigger chance of winning the game.

Many Overwatch players would argue that Roadhog isn't entirely a tank hero, though his HP says so. Either way, he's a useful hero to have in the team. For me, personally, this character is apt for players who have a good sense in timing. His hooks sometimes require accuracy, thus you need to practice it intensely. Apart from that, you must have a quick reflex just in case a damage-type hero tends to bother you (watch out for Tracer and Reaper). While you have the leverage to wipe them out (using the hook and shot combo), you're still open to getting killed. This hero isn't for the faint of heart. The player must love going in and outside of the area, making sure that he got his fragile teammates are well-covered.

Ah, the most popular of all tank heroes. Reinhardt, as obvious as one can see, is the only melee hero in the game. That alone makes him a unique character. Of course, he's not there to spearhead the battle, contrary to what most players think. He's basically there to give support -- to be a walking shield for this allies. However, it's true that there's no exact time or place when to let this guy engage. Should he charge right away or when the opportunity arrives? Either that, he's gonna get killed. The idea here is to go inside the battle with the right ally as a support. Think of Ana, Zenyatta or Mercy giving him a healing boost. As long as you know that you have the right guy to support you, you won't have a hard time really.

If you want to play Zarya in Ovewatch, you must know when to use those barriers. Remember that the more damage she takes (when the barrier is on), the more damage she can also make to her enemies. But then, like Reinhardt, she doesn't need to go into the heat of the battle often. Instead, she needs to withstand the harassment from the opponents while making sure that her support heroes aren't getting busted. She's not even that hard to understand and use. As for her ultimate, remember to only use it when you know you have your teammates beside you. Because seriously, you don't want to shout "fire at will" only to discover that the rest of the hood isn't there to give damage.

The flying mech, D.Va that is. While she's considered as a walking -- or flying -- tank, she doesn't really have that fire power. However, as a piece of advice, she's best at causing troubles. With the amount of life she has, she can withstand attacks while exchanging damage. She can be at her very best, though, if paired with a healer like Ana, Zen and Mercy. I've seen a lot of players using D.Va inappropriately. Instead of going in and out, they're waiting outside just giving fires. This is absolutely wrong. This Overwatch character must go with the tide of battle and be there for his teammates, not the other way around. But of course, don't overdo it. And oh, don't just release her Nuke when there's only a single enemy left. It's recommended to have her put it out when everyone's busy catching others.

What are your thoughts on this Overwatch guide? Which of the game's tank heroes is your favorite? Any other tips you can add? Share it below!

A Complete Guide To Playing Overwatch On King's Row

Want to know the secret to playing good in the Overwatch map called King's Row? Check out this guide!