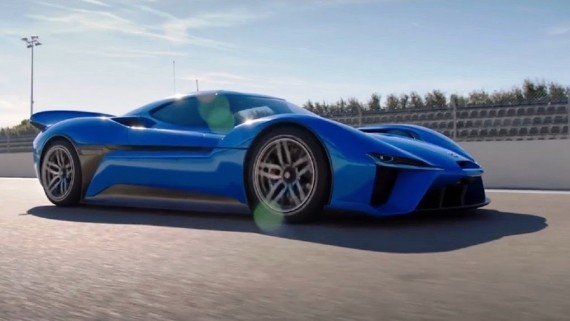 Another company has come forward to challenge Tesla. This time, startup electric car company from China, named NextEV, produces an electric vehicle with supercar capabilities and plans to sell it at a cheap price. (Photo : Car News/ Youtube)

Late last month, Chinese startup electric car company NextEV launched an all-electric supercar named the Nio EP9. The supercar was launched in London and claims to be the fastest electric car in the world. But, how would it compare to other fast electric cars that are already out in the market?

The Nio EP9 Is The Worlds Fastest Electric Car

The NextEV Nio EP9 is powered by four high-performance electric motors and four gearboxes that deliver 1 Megawatt of power or 1,341-brake horsepower. This speed machine can reach zero to 200 kilometers per hour in just 7.1 seconds and can reach top speeds of 313 kilometers per hour. It is equipped with a 70killowatt=hour battery pack that can reach up to 330 miles of range on a single charge. The EP9 set a new world record at the Nurburgring Nordschleife by completing a lap in just seven minutes and 12 seconds. No production unit has been made yet by the company but has already competed in the Formula E series.

A Premium Car With The Price Of A Toyota

NextEV plans to bring production cars in the future that will be an alternative to brands such as BMW and Audi cars. What's compelling about the company is even if they offer high-performance supercars, the prices will be cheap compared to other brands, referring to a price tag similar to that of a Toyota. However, they did not mention whether the comparison will be the price of a Toyota Yaris or a Land Cruiser, consumers will need to guess at this point.

The company clearly shows that they want to rival American startup Tesla with both their technology and customer service. Co-founder of NextEV, William Li, said he owns a Tesla and it took him three months to install the charger at his home, he promises that their customer service will be far better than their American counterpart. Jack Cheng, also a co-founder, stated that crossovers would be sold in the United States as early as late 2018 or by early 2019.

Production Cars Have Been Set For The Future

Aside from the Nio EP9 and the plans to sell crossovers to the United States market, reports from various sources such as Automotive News state that NextEV is also already working on a wide range of electric vehicles that include Sports Utility Vehicles, multi-purpose vehicles, and sedans. Cheng said that the company's first sports utility vehicle is going to be far better than the Tesla Model X with a price that is attainable by regular consumers.

The first one could be a rumored Nio sports utility vehicle that is equipped with a 70-kilowatt battery pack that can reach up to 330 miles on a single charge, which is far greater than the range of the Model X that has an official EPA rating of 257-mile range on a single charge. There is a high possibility that the NextEV Nio Suv will make a debut at the 2017 Shanghai Auto Show in April.

EVs nowadays are coming in with different sizes from small sedans to crossover SUVs. Luxury cars are not left behind as new cars from Audi, Mercedes and Jaguar also take on the electric vehicle market.

Automotive parts manufacturer Delphi and technology company Mobileye ties up to fast track the development of fully autonomous vehicles. Sets target date for full autonomy of cars as early as 2019.